Crvena zvezda BELGRADE defended the Serbian Championship title in a gema against NIS Spartak. Zvezda celebrated 3:1 in the fifth play off match and thus gained the 27th title in the club's history. Read more volleyball news on worldofvolley.com. 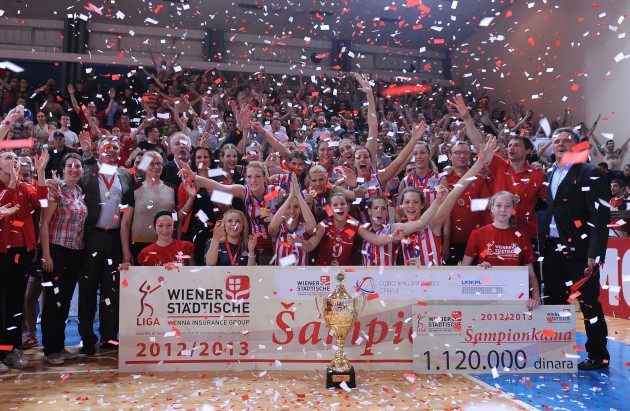 After the starting equilibrium, “red and white” girls gained the lead of 8:3. As the points kept going, the breaking point was at the result 13:9. Spartak, with the great contribution of Matic and Cveticanin, scored a huge serie – 2:7, which brought them a 15:16 lead. Zvezda got disturbed, which led to many errors, followed by Spartak’s gap extention – 15:19, and 16:21, which finnally ended with 19:25 and Spartak claiming the set.

Crvena zvezda reorgainzed, regained focus, and easily claimed the next set with the result 25:14.

Third one was also highlighted by the hosting team. The lead of 8:3 evolved to 12:5. Spartak made efforts to narrow the gap, which led to certain results as they came to 18:16. Then Lukic entered the game which brought the BELGRADE team a needed refreshment and resulted with extending the lead to 21:16, and eventually 25:20 to end the set.

The fourth and, as it turned out, the last set was under Zvezda’s domination. Hosts started with great service and strong attacks which gained them the great lead – 16:8. Local supporters got an extra motiv to stand up and make a frenzy atmosphere, giving their team an excellent boost. Zvezda made a serie of 9:6, to claim the set, win the game, and claim the 27th title.

SRB: Belgrade is ready for 52. Traditional...