WL: “Our imperative is to win” said Stanković

This weekend Serbia will host Bulgaria in the FIVB Volleyball World League pool B. Team coaches and captains answered questions on the press conference. 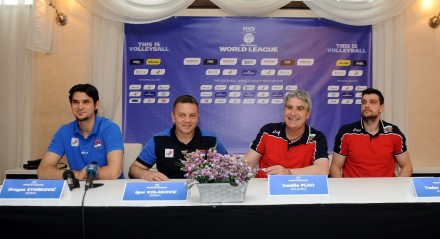 Speaking about their matches against Serbia on June 7 and 8, Bulgarian head coach Camillo Placi commented: “Serbia played very well in Sofia and although we thought we could win the first match, Serbia outplayed us. We raised the level of our game in the second match, but still Serbia were better, even if we took one point. We will try to keep the level of our game up and do the best we can to win in both matches.”

Serbian head coach Igor Kolaković said: “I stick to what I said in Sofia. I can say only the best about the Bulgarian team. It is a team with tradition and quality, which was evident in their matches against the United States team last weekend. The matches will be difficult for all teams now as we approach the end of the Intercontinental Round and fatigue and nerves come into play. As for all teams, to win was imperative from the very first match and this will remain so until the last.“

Bulgarian captain Todor Aleksiev said: “In this weekend, we expect primarily a good game. We missed our chance to qualify for the final tournament. We will be competitive, however, and we will do our best to win both matches. We know it will be difficult – as it was in Sofia – but that is our goal.”

Serbian captain Dragan Stanković said: “Our imperative is to win and we will need to do so in both matches if we want to qualify for the final tournament. After the four matches we won at the start of the World League, we lost four and scored only one additional point. So in these four last matches of the Intercontinental Round, we will try to win each and every time. Even though the Bulgarian team can no longer qualify for the final tournament, they are sure to play their best, which will make this a tough weekend for both teams.”

The matches between Serbia and Bulgaria will be played in the cities of Novi Sad and Niš. The first game is scheduled for Friday June 27 in Novi Sad, the second will take place in Niš on June 29. Both matches start at 20:00 CET.

CL W: We present you seeding pots for women’s category