Halkbank ANKARA is set to host the Final Four Tournament of the 2014 CEV DenizBank Volleyball Champions League – Men through March 22-23 and local star Burutay Subasi can barely wait for these days to come. Subasi, 23, is probably the best Turkish Volleyball player around and this year got the opportunity to join a star-studded roster that includes the likes, inter alia, of Matey Kaziyski, Osmany Juantorena, and Raphael Vieira de Oliveira. 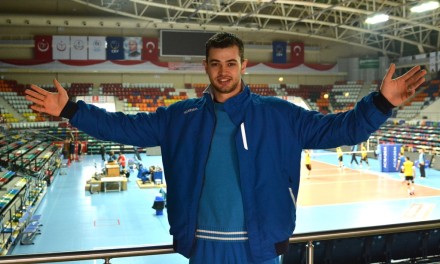 “Of course it is a great feeling to be in a team with some of the world’s best volleyball players” he says. “It is a source of joy. With their help the Turkish players in the team will be able to develop their skills. And since I am still very young, I am proud and happy that I have been given the chance to play with them and for this team.”

You are considered by many experts the Turkish Volleyball player with the greatest potential. Do you feel any pressure or responsibility since the expectations are so high?
“I have to say that every player feels the same pressure, especially during the most important and difficult matches. It does not matter who you are but the way you feel at that moment. Thank God I have to say that I have the chance to play with talented and professional players, so that I can learn from them and improve. This is helping me progress and develop as a player and as a person as well. I am very lucky right now because I am surrounded by some of the world’s best players. This way I do not get to feel so much pressure on me and even if there would be pressure on my shoulders, I would try to find a way to cope with it, at least for the sake of my love for volleyball.”

Halkbank will be hosting the Final Four Tournament of the 2014 CEV DenizBank Volleyball Champions League. Which are your feelings five weeks before the actions get started at the Baskent hall?
“It is difficult to find the right words to describe my feelings. It feels great to know that we will be playing to win the Champions League and that we stand a chance to achieve this goal. This is a dream that you have to live and I wish many more teams and players will get the same opportunity too.”

This will be your second appearance in a Final Four after you played in Lodz in 2012 with the likes of Arkas IZMIR. Which memories do you still have from those days in Poland where your team ended up in fourth place after surprisingly qualifying to the last act of the tournament?

“I still have many memories. I was really proud because that was the first time a team from Turkey had made the Final Four of the men’s Champions League. It was the experience of a lifetime, and especially because of the local fans. The hall was packed with more than 10,000 supporters who never stopped cheering on their heroes. They turned into the seventh player for the home team. I hope we can get the same ambiance also here in Ankara. I have never seen anything like that for a volleyball game here in Turkey; it was like being in a soccer stadium.”

ITA W: 22 points not enough for even one set?

POL M: Akhrem – “We will not surrender”