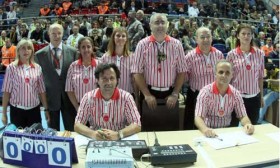 All of them are located in Black sea region of Turkey (which is going to make the travelling of their opponents harder) and none of them has strong roster, good budget or bigger chances to finish in upper half of the chart.
The MEF Okullari team which has been eliminated in the first round of play-offs last year, has been dissolved and its sponsor MEF supports promising team of Galatasaray Yurtici Kargo this season, supported by two Cubans Bell and Hidalgo and Venezuelan Pinerua.

Galatasaray will thus substitute the Ziraat Bankasi Ankara among the the „top five“ – group of the five strongest teams which now consists of Fenerbahce, Galatasaray, Istanbul Büyüksehir Belediyesi, Arkas Izmir and Halkbank Ankara.

Due to significant budget cuts, Ziraat transferred only one foreigner for this season (Brasilian setter Adriano Lamb) and the rest of team consist of young Turkish players.

Halkbank Ankara is a team with always generous budget and high-quality Turkish players, but still has not found a good nr. 4 to support their newly transferred spiker Gundars Celitans.

American setter Kevin Hansen and two young Canadian players Gord Perrin and Justin Duff were three new transfers of this summer which along with Joao Bravo and Liberman Agamez have risen the amount of foreigners in Arkas Izmir to five.

As all of them definitely cannot play in league, their coach Glenn Hoag can choose a very different team for games in pool A of the Champions league.

The biggest star of Turkish men´s league remains the same – Ivan Miljkovic of Fenerbahce Istanbul who still keeps his top shape and along with his teammate Leonel Marshall stands for the most dangerous attack force in Turkish league.

Due to financial troubles, one of two participants in this year´s edition of Champions league (pool E) did not have chance to transfer any new player.

Regardless, coach Castellani thinks that his last-year-champions are strong enough to play leading role in league again and the get into the quarter finals of Champions league.