Ankle and foot injuries can be frustrating as it is often very painful or even not possible to walk around. For this reason, fast recovery is essential. This and other volleyball news read on Worldofvolley.com. 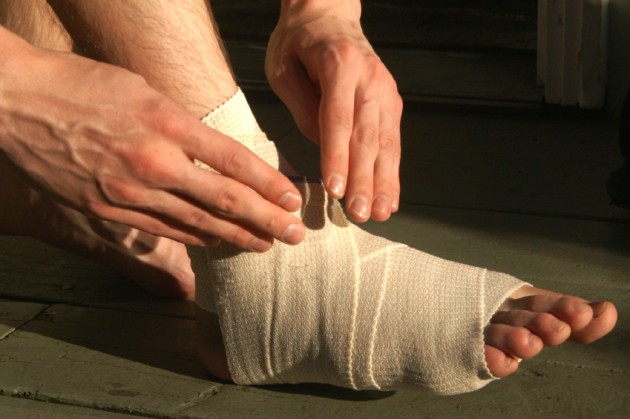 You’re likely to have experienced one of the following if you’ve had an ankle or foot injury:

– sprained ankle – often called a twisted ankle, it is more normally the ligaments on the outside of the foot (the lateral ligament complex) which are strained
– plantar fasciitis – the plantar faschia is a thick band of fibres that runs along the sole of the foot. It commonly causes pain in the heel
– achilles tendonitis – joining the two calf muscles (soleus and gastrocnemius) together and attaching them to the back of the heel bone, achilles tendonitis is a common injury specially in people who enjoy running sports or cycling

Causes of swollen ankles and sprains

An ankle sprain is an injury in which ligaments are stretched or torn. Ankle sprains are classified as grade 1 – 3 depending on the severity of the sprain:

The foot comprises of many bones, each of these are held to their neighbours by taut ligaments. Ligaments have a fair amount of give in them, but if forced beyond their normal limits, for instance if you land awkwardly, a turned ankle or sprain occurs.

A lateral or inversion sprain occurs if the ligaments on the outside of the foot are affected. This happens if the foot goes underneath the body with the sole of the foot facing inwards.

A medial or eversion sprain is much less common. It happens if the ankle is turned outwards and affects the ligaments on the inside of the ankle.

In the initial stages after a sprained, swollen or turned ankle, the main problems are usually pain and swelling.

Effective treatment of a sprained ankle at this stage includes using an ice pack and elevating the foot to stop any further internal bleeding and to start to reduce swelling.

Gentle movement of the foot also starts to reduce swelling.

As time goes on, the foot movement can be increased and it is important to retrain the muscles around the ankle and the lower leg by increasing range of movement and resisted exercises.

The final and probably most important stage of the treatment of a sprained ankle of whatever grade is to retrain the proprioceptive feedback mechanism.

The ankle ligaments have a huge role in telling the brain what position the foot is in. Visually, you get a lot of position information, but if you don’t see an obstacle or uneven surface you need the proprioceptive mechanism to work rapidly and effectively to prevent a further sprain or turned ankle from occurring.

Many sportspeople find that they lack confidence in the ankle when first returning to sport and fear a re-sprain. Taping can help in this situation.

Check out our Interviews section, every Tuesday a new story, tomorrow read about Yuri Cherednik – We can defeat Zenit.