A sprained ankle is one of the most common leg injuries. Getting the correct sprained ankle treatment will help the injury to heal quicker and prevent reoccurrence. WorldofVolley brings you the latest volleyball news. 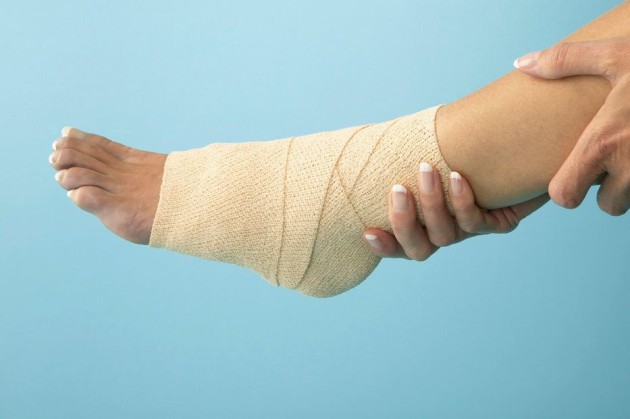 All joints have ligaments which are strong bands of fibres that go from one bone to the adjacent one, these ligaments provide stability to the joint. A joint sprain occurs when one or more ligaments are stretched or torn.

As soon as possible after the injury apply ice. Using ice as the first line sprained ankle treatment limits the amount of swelling that builds up, by temporarily reducing the circulation to the area.

The mnenonic RICE is often used to describe the treatment needed at this stage:

Rest: Relative rest is needed, by which is meant refraining from sport and staying off the ankle as much as possible.

Compression: Use some gentle compression, such as a bandage, to reduce swelling

Elevation: lie with the foot elevated to reduce swelling.

Gentle movement of the foot, pulling the toes up, and pointing down, within the limits of the pain, also starts to reduce swelling and restore movement.

As time goes on, the foot movement can be increased and it is important to strengthen the muscles around the ankle and the lower leg by exercise. Exercises need to be gradually progressed to those done with the body weight on the foot.

The final and probably most important stage of sprained ankle treatment is to retrain what is known as the proprioceptive feedback mechanism.

All ligaments in the body have a huge role in telling the brain what position a joint is in. Every fraction of the second receptors in all joints are sending information to the brain about the joint’s position, in turn the brain activates appropriate muscles to alter the joint position accordingly. This is known as the proprioception feedback loop and to prevent injury to a joint it must happen continuously and rapidly.

When the eyes are open the visual feedback the brain receives also gives the brain a lot of information about joint position, however if there is for instance an unseen obstacle or an uneven surface, the proprioceptive mechanism must work rapidly and effectively to prevent a further sprain from occurring. Lack of re- training of the proprioception mechanism is the most common reason that an ankle which has been sprained once would be re-sprained again in the future.

Many sportspeople find that they lack confidence in the ankle when first returning to sport and fear a re-sprain. Taping, or an ankle support, can help in this situation.

Care should be taken however to continue to build up the joint’s natural proprioceptive mechanism, so as not to become over- reliant on a brace or taping.

Check out our Interviews section, every Tuesday a new intervew! Tomorrow read about…

Practice your hands and fingers