Poland’s Bank BPS Fakro MUSZYNA won in the first final match of the 2013 CEV Volleyball Cup against Turkey’s Fenerbahce SK ISTANBUL 3:2 (26-24, 26-24, 19-25, 23-25, and 15-11). The return match is scheduled for this coming Saturday, March 2, at Burhan Felek Volleyball Hall in Istanbul. Agnieszka Bednarek-Kasza and Anna Werblinska had a good game. 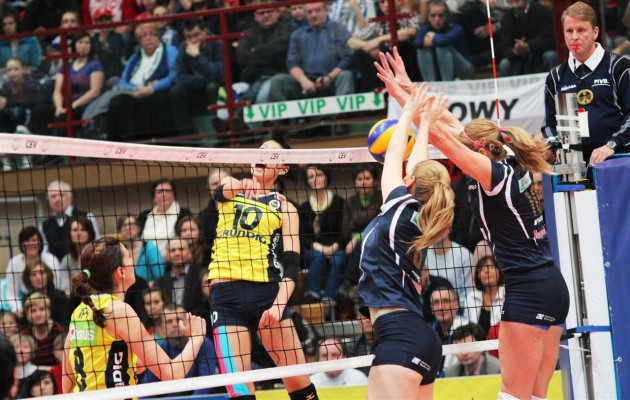 Fenerbahce set the pace of the game in the early phases of the opening set (6:8) but MUSZYNA responded well drawing level before moving to the front (11:9) and claiming a very slim margin at the second technical time-out (16:15). Fenerbahce head coach Kamil Soz stopped the game twice as the home side had moved up 18:16 and 20:16 and as his players could finally cut the deficit to a minimum (22:21), home mentor Bogdan Serwinski asked for a time-out. After the score was drawn twice at 23 and 24, the local favorites claimed the next couple of rallies to wrap it up at 26-24.

The score remained very tight also in the opening of set 2 with Agnieszka Bednarek-Kasza and Anna Werblinska pacing the offensive play of Bank BPS Fakro. After MUSZYNA had gone up 7:6, Fenerbahce fought back by scoring the next four rallies (7:10) but the home heroines responded quite quickly to draw level at 11. Fenerbahce moved to the front once more (14:17) but could not capitalize on four set balls (20:24), with MUSZYNA storming back to finish it off at 26-24 for the provisional 2:0.

Fenerbahce regrouped in set 3 going up 1:5 and 2:8 but after the first technical time-out, Bank BPS Fakro could get back on track (11:13) and was trailing only by two points (14:16) halfway through the set. Though the home ladies showed some great actions, Fenerbahce was still leading the way (16:20) and could eventually call for the fourth set (19-25).

The home fans were literally ecstatic as MUSZYNA swept 7 points in a row in the opening of set 4 and they eventually cruised to a massive 11:3 to somehow pre-determine the fate of the game. Still only a few minutes later their lead had dropped to only two points (12:10) and Fenerbahce followed with a 10-2 series that practically paved the way for the final 23-25 that called for the tie-break.

That major setback did nevertheless not shake the home heroines who caught a good start in the deciding set (5:2) and did not lose composure to firmly control the operations (11:8). MUSZYNA did eventually finish it off at 15-11 to claim a much desired win waiting now for the second act that is coming up on Saturday in Turkey’s megalopolis.

For more volleyball news from this competition click on CEV Cup 2012/2013 F.