Munich, Germany, January 31, 2012. Still unbeaten in domestic competitions and after pocketing the very last ticket for the second phase of the competition, Germany’s Generali UNTERHACHING will be trying to work some magic again while hosting on Wednesday night Russia’s Lokomotiv NOVOSIBIRSK for the Playoffs 12 of the 2012 CEV Volleyball Champions League. 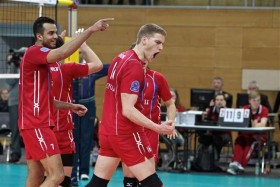 It was only two weeks ago that great joy and some frustration hit Generali UNTERHACHING almost at the same time.

After reaching the Playoffs 12 via a 3:0 win against Bre Banca Lannutti CUNEO thereby finishing as the best third-ranked team across all prelim groups, Germany’s top club this season drew Lokomotiv NOVOSIBIRSK for the knockout round.

However, leading up to the game on Wednesday at Generali Sports Arena the first shock has long gone away.

“We’ll play with courage”, coach Mihai Paduretu promises, “those who don’t have courage should stay at home and not play in the Champions League”.

And thus he adds: “If we are able to get a good start and make some big points early, everything will be possible for us”.

Paduretu also hopes his side will get a boost from the crowd, promising the audience a spectacular game that “will be a treat to Volleyball fans”.

The Romanian-born mentor expects “the hardest game ever played at Generali Sports Arena, for NOVOSIBIRSK plays powerful Volleyball. They are not particularly good technically, but they’ll want to hit the balls with an elemental force around our ears”.

That means a lot of work for his side in defense and reception.

Paduretu’s players meet their opponent with a lot of respect.

“NOVOSIBIRSK is the cup winner in a very strong Russian league, so that tells you all about the balance of power for Wednesday”, diagonal Christian Dünnes (see picture, with Fredy Cedeno left) says.

“Even so, our goal must be to gain some advantage for the return game a week later”, he adds.

That is seconded by his coach. “It will be difficult to pull the Russian bear’s fur over his ears”, he says, using a German phrase that is used to describe a convincing win.

But Paduretu thinks he can put some winning cards on the table: “I’ve watched four games of Lokomotiv, I’ve conducted a lot of phone calls, I’ve studied all the information our scouts gathered, and now we have a fairly comprehensive picture of our opponent”, he explains.

Generali is aware of the fact that if they want to make their meetings with Lokomotiv a tight affair they need to win the home game to at least get the chance to play a golden set a week later in Siberia.

Last season Generali felt pretty good after a home win against JASTRZEBSKI Wegiel only to feel bad after losing everything in the decisive tie-break in Poland.

Should UNTERHACHING be able to work a miracle this time they would meet either Zaksa KEDZIERZYN-KOZLE from Poland or Arkas IZMIR of Turkey in the Playoffs 6.

After the no longer considered possible trip to the Playoffs 12 every game in the CEV Volleyball Champions League is taken as an encore in Unterhaching.

However, getting to the Playoffs 6 would be a huge step for the small club from the outskirts of Munich who constantly is in a battle for attention in a market that is dominated by football and now even basketball thanks to FC Bayern Munich.

“The participation in the Champions League is extremely important for the development of our club”, Generali’s manager Josef Köck says.

Playing in the elite European league “doesn’t pay off right away”, he adds, “with the costs for television production and travel expenses you even have to invest money at first”.

However, that’s not the way Köck is calculating. “Every game in the Champions League raises our level of exposure in the media. And only by that we can attract more sponsors”.

So UNTERHACHING wants to take the chance to brighten its future in every aspect, knowing that NOVOSIBIRSK is a giant bear to hunt down.

The captain of the club from Siberia is American Ryan Madsen Miller who was the middle blocker when the U.S. V

olleyball national team claimed the gold medal at the 2008 Olympics in Beijing.

Another player Generali has to keep in check is Cuban Michael Sanchez Bozhulev.

“Sanchez reaches a height of up to 3.70 meters while attacking and smashes the ball with an incredible force. Although he always hits in but one direction, he is still difficult to stop”, Paduretu says.

UNTERHACHING’S coach also has an eye on setter Alexander Butko and wing spiker Denis Biryukov, both of them being national team players for Russia.

And Paduretu won’t forget Lukas Divis who brings back bad memories for Generali.

In last season’s Playoffs 12 against JASTRZEBSKI Wegiel Divis was essential “in kicking us out of the competition which he will try again this year with Lokomotiv”, Paduretu says about the Slovak guy who will meet national team colleagues Brano Skladany and Robert Hupka on the other side of the net.

CEV CL: VILLA CORTESE is not afraid of Russian heavyweight