In January, Cool Volley dipped its toes in the waters of St. Kitts and Nevis and received a very positive response from all involved, according to national federation president Glenn Quinlan and FIVB technical and development director Helgi Thorsteinsson. 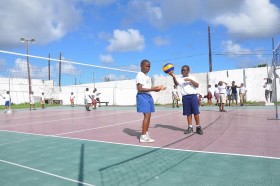 “In general, we are seeing that our Cool Volley campaign is starting to bear fruits as well as our Volley All Festival concept,” Thorsteinsson said. “Federations apply it and try to establish strong grassroots programmes and interact with their respective ministries, NOC and local sponsors.”

In the St. Kitts and Nevis programme, 10 of the 21 primary schools on the island were targeted, primarily based on proximity to playgrounds, and the Ministry of Education and the Department of Sport assisted with transportation where necessary.

The schools were contacted in mid-December and the programme was explained to them. Volleyball personnel helped in preparing courts and were assisted by national players and Level I and II coaches.

Approximately 110 students aged 10-12 took part in the event, which lasted for two hours and involved parents and teachers on five mini-courts. Games were played up to 15 points and lasted around seven minutes.

The organisers say the response was very positive and the schools that didn’t take part would like an opportunity to participate in future programmes. The federation is now following up with all 21 primary schools and hope to present an expanded programme in the future.