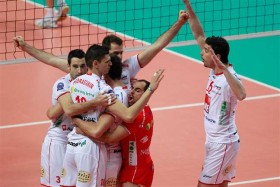 The opening set was very tight with no team being able to take a real break until MACERATA did so with a couple of aces paving the way for the final 22-25. Bre Banca Lannutti sped up the tempo after the second technical time-out in set 2 displaying a good defense and powered by the attacks of Vissotto and Ngapeth (25-20). After going up 8:4, CUNEO controlled the operations in set 3 and even though MACERATA made it to -1, the guests could not move ahead in the score (25-21), with the hosts making the difference in that section with 3 aces and good blocks. MACERATA stormed back in set 4 with Jiri Kovar on fire and closing it at 26-24 by silvering a second set ball. It was a breathtaking tie-break followed by another crazy golden set, with MACERATA stamping a double 16-14 to clinch a ticket for the Playoffs 6.
“All matches with CUNEO are very tough so I am very happy and proud of this result” said Omrcen after the game. “This was the real face of MACERATA, not the one we had seen last week. The match has turned into a tough battle, and the golden set is always a kind of lottery. We still have pretty much to play for in the national league and the season remains long” stated Wout Wijsmans, the captain of Bre Banca Lannutti CUNEO.