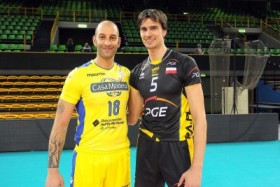 It was a good game for Casa Modena that has played five sets with the champions of Poland, Skra Belchatow. Daniele Bagnoli has rotated on the court all the players, with the exception of Matthew Martin. On the court has also entered Viktor Yosifov, who played little more than a set.

Across the net was the strong Polish team that on 17. and 18. March in Lodz will be organizing and participating in the Champions League Final Four.

“I must say the truth. When we gathered in Modena I became very emotional ” – said today Dutch center of Skra, Wytze  Kooistra, after playing three years in Modena.
“I’m still in touch with many people and friends from Modena and it is special for me. I have also to say that we need to play many games of this kind. We are the first in the league and we will play the Final Four Champions at home with Italians and Russians.
I also saw the game on Sunday with Macerata on TV. Maybe the team did not have its  best moments, but I saw he boys were very determined and showed the qualities that I know.”