Trento, Italy, March 1, 2012. Italy’s TRENTINO PlanetWin365 will try to go for a historic poker this coming March 17-18 at “Atlas Arena” in Lodz after tonight the group captained by Matey Kaziyski downed Lube Banca Marche MACERATA in straight sets (25-18, 25-22, 25-21) to call for the golden set and eventually qualify (15-9) for the last and deciding act of the 2012 CEV Volleyball Champions League. 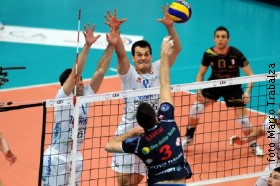 Raphael and Djuric in block

After losing last week in Macerata, TRENTINO asserted its supremacy tonight in front of the home audience standing out in all fundamentals with the only phases of the match where Lube was able to keep that tremendous pace being some sections of the first and third set. Cuban-born wing spiker Osmany Juantorena was voted MVP of the match after scoring a total of 17 points, including 3 aces, and registering a remarkable 62% of efficiency in attack. Middle blocker Emanuele Birarelli was back in action after a stop that had lasted for three weeks and he also contributed some good points to the final count.
“I have to praise our opponents because they have been pressuring us not only tonight but also in all our previous matches” said TRENTINO head coach Radostin Stoytchev. “I am happy because this time we showed that we are a great team and not only a group made up by stellar individuals. We can celebrate this win but our minds are already set on the final four which is coming up in only a couple of weeks” he added.
“TRENTINO deserved this win and the pass for the final four because they set the tempo of the game right from the start” stated MACERATA head coach Alberto Giuliani. “We had troubles in coping with their powerful service and they also did control very well all deciding moments of the match”.