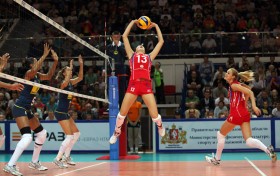 Contract  with 23-year-old volleyball player ends in the end of the season with a Krasnodar team which colors she defends from 2010. “Dinamo Krasnodar”  offered Startseva extension of the contract for one year.

In December 2011 Startseva was injured her foot,  her treatment required surgery. Currently, Evgenia is on the final course of rehabilitation in Germany.

Startseva debuted in 2007 in national team of Russia. She became world champion in 2010 and silver medal owner at World Grand Prix 2009.

“Dinamo” Kazan is  in the lead of the championship standings in Russia, “Omichka” is fourth,  “Dinamo Krasnodar ” – the fifth and “Odintsovo-Zarechye” – the ninth.

CEV VC W: Galatasaray makes it to semifinals of CEV Cup with another straight win