In the first leg of the 2012 CEV Volleyball Cup final Asseco Resovia RZESZOW was defeated by Dinamo MOSCOW 2:3 after a dramatic tie-break (20-25, 25-22, 20-25, 25-23, 13-15) where the hosts were leading 13:11 but simply lost their chances to score an important win. Thanks to this victory the Russians are in a pretty much favorable position for the return game that is scheduled for this Sunday at 6 pm local time in Moscow. 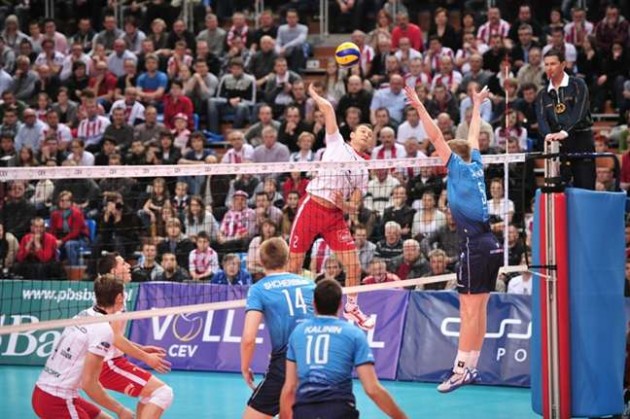 More than 4’000 supporters at “Podpromie” sports hall created an incredible atmosphere but in the end they had to accept the win of Dinamo. Asseco Resovia players counted very much on their strong service but the Russian team turned out to be stronger in this fundamental (7 vs. 12 aces).

The hero of the game was Dinamo opposite Nikolay Pavlov (24 points) who was very impressive with his quick and massive shots from the wings. Georg Grozer scored 27 points for Asseco Resovia (including 4 aces and 3 blocks) but his solid performance wasn’t enough for a home victory. Both teams committed a lot of errors (Resovia 30 whereas Dinamo totaled 22) but the game was full of emotions, ups and downs, turning points and incredible rallies.

The hosts started the game very determined and managed to gain a 3-point lead (6:3) thanks to the powerful service provided by Wojciech Grzyb and efficient counter-attacks. However, the response from the Russian side was very quick (6:7) as Nikolay Pavlov displayed very smart and diverse services.

Resovia players had huge problems in having a positive reception. After another point in this element (this time by setter Sergey Grankin) the advantage of the visiting team increased up to 4 points (9:13). Andrzej Kowal – head coach of the local team – tried to help his team by taking a time-out and making some changes (Paul Lotman replaced Marko Bojic in order to improve the reception), however after an ace by Denis Kalinin the score stood at 11:16 in favor of Dinamo.

With such an advantage the Russians played with total confidence whereas the hosts seemed to be vulnerable to the powerful but at the same time very clever Volleyball of their opponents (Dinamo committed only 2 mistakes whereas Resovia had 8).

The last ball was silvered in impressive style by Nikolay Pavlov – the real man of the first set (7 points, 62% of efficiency in attack).

In the opening phases of the second set the Russians were continuing their show (5:10 after an incredibly quick shot by Pavlov) but when second setter Maciej Dobrowolski replaced Lukas Tichacek Resovia players started their chase (9:11).

Dinamo didn’t want to let the hosting team bounce back (9:13 after an ace by Denis Kalinin) but afterwards the local team managed not only to level the score (15:15) but even to take the initiative (16:15 after an ace by Aleh Akhrem and 18:16 thanks to an impressive counter-attack by Georg Grozer).

When the always dangerous and very efficient Nikolay Pavlov was stopped by Resovia block two times in a row the hosts sailed away by 4 points (22:18) and managed to maintain the lead until the end, as Piotr Nowakowski silvered the last ball right from the middle of the net.

However, in the next set Dinamo MOSCOW once again showed off its great skills in service. The Russians shook the hosts as Resovia players had huge problems to display some good reception (especially Paul Lotman). It was 5:10 for Dinamo after another excellent counter-attack of Nikolay Pavlov. A series of mighty services performed by Georg Grozer helped the Poles cut the margin (from 7:11 to 11:12) but it was just a good moment. When Denis Kalinin stamped another ace for Dinamo the Muscovites were leading by 4 points (15:19). The hosts were trying to catch up with their opponents (20:23 after a block on Denin Kalinin) but the incredible Nikolay Pavlov killed the last couple of balls in attack (20-25).

The plot in the fourth set was unbelievable. The Poles were once again 5 points down (5:10) but managed to level the score (10:10) and took the lead (11:10) after a great counter-attack of Aleh Akhrem. From that moment both teams were fighting point by point and a hard battle started. When it was 16:15 for the local team Asseco Resovia captain Aleh Akhrem had to leave the court due to painful cramps in his thigh (he was replaced by Marko Bojic until the end of the game). Nevertheless, his team-mates did a great job and were able to extend the lead up to 3 points (21:18) after a silly mistake committed by Dinamo. It was 24:21 for the hosts when the Russians defended 2 set balls in a row (24:23 after an attack of Denis Kalinin). The atmosphere was very tense as the local public put a lot of pressure on Dinamo players by whistling, humming and shouting at them. When Georg Grozer silvered the last ball (25-23) and called for the tie-break the supporters in Rzeszow could not hide their joy and relief.

In the fifth and deciding set the emotions sky-rocketed and all fans were watching the game standing on their feet. The beginning of this section was in favor of Asseco Resovia that was up by 3 points (6:3). The Russians responded very quickly (7:6) but after an impressive single block of Paul Lotman on Nikolay Pavlov it was 9:6 for the local heroes. Thanks to the incredible service of Pavel Kruglov (he replaced David Lee in this fundamental) Dinamo cut the margin (12:10). Resovia mentor Andrzej Kowal called for a time-out but afterwards Kruglov stamped another ace (12:11). When Piotr Nowakowski successfully attacked from the middle (13:11) the supporters of the Polish team believed that the result was still under control of their favorites but they were wrong as Dinamo not only reduced the gap (13:13) but also scored the next two rallies thanks to the strong service of Nikolay Pavlov, efficient blocks on Georg Grozer and impressive counter-attacks by Peter Veres. The white-red dressed supporters of the local team had to accept the disappointing defeat waiting now for the return match coming up this Sunday in Moscow.

“I’d like to congratulate our opponents on their victory and on the psychological advantage that they definitely have before the return game in Moscow. On the other hand, they have to win also in the second leg which means that we are still in contention for the trophy. I believe that we are able to fight bravely in Russia and if we do this we can make it to the golden set. We will be trying to take our chances in Moscow. As for tonight match, it was a great show, both teams played at a quite good level despite the many errors we committed with our service. I think that it was very likeable for our fans and this is important for Volleyball” said Maciej Dobrowolski, Asseco Resovia setter who replaced the injured Aleh Akrem at the press conference staged after the match.

“Maybe it was a good spectacle for the fans but definitely not for our team as it was very difficult for us to seize this victory. In the fourth set we lost our advantage and let the hosts level the score. In the tie-break we were lagging behind by a couple of points but fortunately in the end the luck was on our side” commented Sergey Grankin, team captain of Dinamo MOSCOW.

“It was a game full of errors from both teams. We were counting on our service and reception before this match and unfortunately in these fundamentals we were worse than Dinamo. There were some moments in which we were playing at a very good level but against such a strong opponent every point is crucial. We have lost 18 points in reception and it was a way too much. We had a big chance, especially in the tie-break, but we didn’t display the necessary quality and efficiency in reception. Anyway, we are coming to Moscow in order to fight as we have nothing to lose at the moment” commented Andrzej Kowal, the head coach of the hosting team.

“It was a very competitive game. Personally I didn’t expect that it would be so difficult for us to score this victory. Of course, Resovia is a very good team but I was very surprised that my players committed such a terrific amount of errors that they usually don’t do. This victory is very precious but honestly I’m not satisfied with the quality of the play presented tonight by my players” concluded Russian coach Yury Cherednik.

CEV CUP W: Check out e-book to get the latest info about the final game in Busto Arsizio