CEV CL: Watch our for “The Big Hit!” to see the coolest actions from the greatest Volleyball stars

Luxembourg/Vienna, December 19, 2011. In combination with the 2012 CEV Volleyball Champions League which is running at full speed even only a few days before the usual Christmas break, the European Volleyball Confederation (CEV) and its media partner LAOLA1.tv have agreed upon delivering an additional, captivating feed to all Volleyball fans. 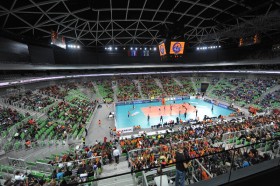 “The Big Hit!” is indeed a weekly recap provided upon completion of each round of play that is available via the official website of LAOLA1.tv, and that is being aired also by some of the host broadcasters of Europe’s most elitist competition.

That list is getting longer and longer and so far it includes Eurosport Asia, NTV+ (Russia), Dolce TV (Romania), Arena Sport (Serbia, Croatia and Montenegro), Ma Chaîne Sport (France) and Dubai Sports Channel (Middle East). Via this weekly magazine all Volleyball fans will have the unique opportunity to get a recap of the latest matches played for the 2012 CEV Volleyball Champions League as well as to check the actions of the greatest stars out there as they embark on their quest for the crown that will be at stake next March.

So check it out and stay tuned for the latest news from the Volleyball world!