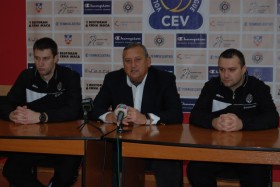 It has been more than a month since the guys in black and white jerseys played TRENTINO PlanetWin365 and last week they lost 1:3 to Spain’s CAI TERUEL. On Tuesday evening Partizan Termoelektro has got the opportunity to take immediate revenge for that defeat

Team captain Nikola Mijailovic says: “We have very high ambitions for this match after last week in Spain we were very close to take at least one point. We were a very tough rival for CAI TERUEL and I am confident that we can play even better than we did last week”.

Head coach Milan Djuricic adds: “I expect that my guys will be playing their best as they did for the last couple of sets last week in Spain. We have to stabilize our reception and if we succeed in doing this, we can go for a positive result”.

Club President Nenad Golijanin has called all Volleyball fans to make it to the “Sumice” sports hall for this game that will be opposing Serbia’s to Spain’s national champions.

CEV CL: Watch our for “The Big Hit!” to see the coolest actions from the greatest Volleyball stars

Turkey: Volleyball is on top of the...