Ivan Miljkovic spoke of the Fenerbahce's game with Dinamo moscow, coach Bangoli, the national team of Serbia and his former teammate Aleksandar Atanasijevic. 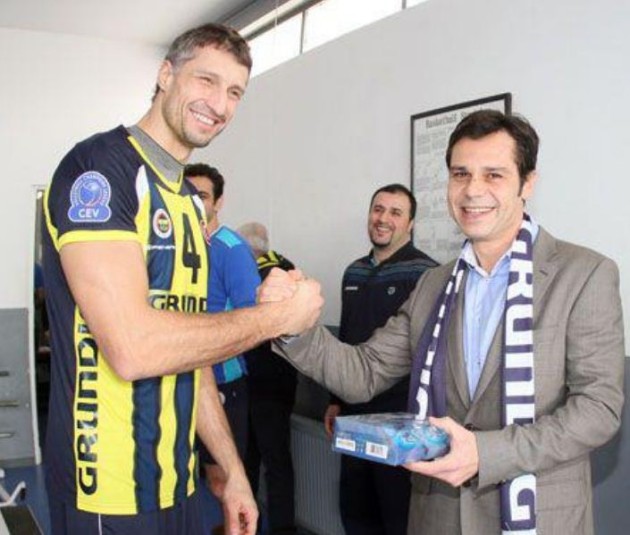 – What are the chances of “Fenerbahce” to continue the struggle in the league after this match?

– We unfortunately, don’t have chances to stay in the Champions League.

– We tried but we couldn’t find our game. It was clear that we played a good game, except for the fourth set. We didn’t give many second chance points. Overall, the results shows that we were close to winning, and I am satisfied with the game.

– Did you know that Bagnoli coached Dinamo?

– Yes, of course, I know. As far as I know, under Bagnoli Dinamo reached certain heights.

– Did you know of the staffing problems of Dinamo, Kurek and Veres were injured?

– We played three weeks ago, when both of them were not on the court. And today we knew that Bartosz will come to help his team. And Peter showed more than a decent game today and created a lot of problems to our defense.

– Your team didn’t play well in the end of the sets. Why?

– I would not say that we didn’t play well. Just today, for some reason, we made a lot of unnecessary mistakes that can not be allowed at the end of the sets. It’s a shame, of course, when you go toe to toe with your opponent the whole set, and then make mistakes, and it was all for nothing.

– Why did Fenerbahce have a weak start this season? Maybe the team and the coach are not used to each other?

– We have a lot of injured players in the team, there are some organizational problems. In general, because of these issues we can still play at the level that we are required.

– The last medal you won with the national team at the European Championship was the gold. Is it special because of the fact that it was the last?

– No, to be honest, I did not have any special medals. I’m just happy that I had the honor to become the captain of a very young team and even win the gold.

– When you watch matches on TV, do you have the desire to return to the national team?

– No, I do not even think about. There are many wonderful things besides playing for the national team.

– Serbia played this summer in the Olympics. What is your impression?

– The end result shows it all. This is normal, I did not see anything terrible or, on the contrary, remarkable.

– It seems that Aleksandar Atanasijevic will be the new Miljkovic. All over the world they call him that.

– We will see in ten years. I’ll be happy for him if he wins in his career as much as I won. Let them call him that, but it is too early to judge.

– What do you think, how much more will you delight us with your game? In Russia, you have lots of fans.

– I can not imagine, maybe a year, maybe two, three … I’m still in love with volleyball and want to play, the main thing that allows me to play is my health.

– Did you know that in Russia, you have a lot of fans?

– Yes, just five minutes ago, I was approached to be photographed, to give autographs … they even spoke to me in Serbian. It is always good when you are recognized not only in your country but also internationally.

POL M: The desire of volleyball in Warsaw