Last year Italy’s Giulia Momoli participated in the final stage of the EEVZA Beach Volleyball Tour at Kaliningrad, Russia, and eventually won gold there together with local heroine Evgenia Ukolova. The organizer of the tournament, who is also a member of the European Beach Volleyball Commission (EBVC), Ilya Volodarskiy, mentioned to the two-time Italian champion that he was the mentor of a semi-professional Volleyball club based in Moscow named after US American heiress and socialite Paris Hilton. 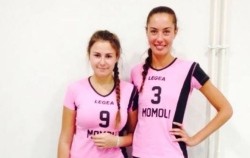 “Well, why not to change this name into Momoli?” said the Italian player. Volodarskiy said he would change the name of the club for the start of the 2013/2014 season. One year later the members of that same team are wearing a jersey featuring the name of the two-time Italian champion who has missed the entire 2013 season after undergoing knee surgery. “I thought it was a joke but in the end his promise has turned into reality” Momoli said to a local newspaper from the neighborhood where she was born. “I am deeply impressed by this action.”

The team has won the last three editions of the Moscow Championship. “They are playing Volleyball just for fun and do not want to make it to the professional leagues. They have some players who used to perform at a higher level about 10 years ago while all other members of the team are much younger” Momoli continues. “Volodarskiy has even offered me the chance to follow their matches or to join the actions for the Playoffs.”

Momoli is still searching for a partner for the 2014 season. After parting ways with Daniela Gioria at the end of the 2012 season, she was set to compete with former European champion Greta Cicolari but she has been recently suspended for six months by the Disciplinary Committee of the Italian Volleyball Federation.