Natalia Malaga is so famous in Peru that she cannot go for shopping without being stopped by someone requesting an autograph. Natalia is coaching Peru’s junior team that competed in Brno at the 2013 FIVB Women’s U20 World Championship. In a few weeks, Natalia will do the same at FIVB Girls’ U18 World Championship in Thailand. 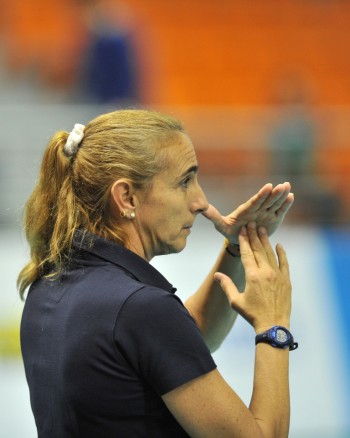 “I coach both groups this year. I am expecting more from the younger team. They grew up together; they are more compact as a team. You cannot grit and passion train as we do with technics or tactics. In Brno we played with five juniors. The rest of the team is the U18 preparing for Thailand.“

Natalia’s style is very unique, with timeouts full of motivation (and words that are not always mentioned in classic Spanish dictionaries). Her speeches to the team have become a “must see” in the sports world.

These are important aspects since they attract new spectators for volleyball, of course, but the most important matter for Peruvian volleyball is that Natalia, with her style, brings more players to the gym.

Natalia focuses particularly on that point: no other team travelled to Czech Republic with 15 players. Three young players watch the matches from the stands and train with the team in order to accelerate their development and experience.

“I’m not sure I can help the sport with this so-called popularity. It is true that people in Peru are treating me with a lot of affect. However, I often think that I need to rest, far from the volleyball fans at home, relaxing, without the pressure that the social media put on our shoulders nowadays. Every day I read comments like ‘Where is your team? Why don’t we have a team like in eighties?’ The fans compare with the past. It is not possible. The athletes’ mentality have completely changed. I do not have all the answers. I am not on the court to solve the problems directly. People think that our only need is to select tall players. In the 80ies, there were short and tall players as well. The most important thing is that we were playing. It was hard for us to obtain things. Today everything is easy. At that time, we were born with so much grit. The passion we had in our heart is not like serve or attack: you cannot teach that in a training session.”

In fact, there is another Natalia Malaga, the former player, the star. Natalia has played in Kajot Arena, the main venue of the 2013 FIVB Women’s U20 World Championship.

It happened in 1986 for the Women’s’ World Championship when Peru won the bronze medals. It was her second Senior World Championship, since as a junior she already played the 1982 edition in Peru, not being afraid of playing against older and more experienced players at home. Peru won silver, behind China.

Peru led 2-0 and 12-6 in the third set of the final against Russia, all set for a historical Olympic gold medal. However, Peru lost 17-15 in the fifth set versus Karpol’s team.

Peru was the first South American team to win a medal in volleyball, but in Peru, many people remember the final loss. “They still ask us about that match,” says Natalia with a sad smile.

“Now, I cannot see the rivalry in the eyes of nowadays players, the competition we had among ourselves and with the opponents. My generation had plenty of it. My athletes are friends. They do not care that much whether they are playing or not. Back in my time, we were crazy about it. Fajardo, Perez Del Solar, myself… We were rivals. I could not stand to leave my place for a teammate. That’s what I miss with the new generation.”

It is easy to find Natalia’s tracks on internet. On Google, you may discover even the nickname the imitators gave her: it is ‘Natalia Mala Mala’, joking about her family name and the Spanish definition of “not politically correct expressions”.

“I am not completely ok with that kind of humour. It is something that you have to accept. They enter your private life. I am happier by seeing different television transmissions, the ones that help our sport growing: our matches! Like here in Brno with all our competitions broadcasted live in Peru.”

Check out our Did you know? section, every Thursday a new story.