Ivan Zaytsev spoke about his team, about his position of the opposite, the Italian volleyball in general and his multicultural family.

How does it feel to be the leader of the team that has a long tradition of winning?

“I do not feel like that. I could say a leader is a bit strong word. Until last year I felt younger, next to great volleyball players such as Mastrangelo, Papi and Fei. Now I am just a year older.“

You have played as a setter and a receiver and now you play as opposite. Have you considered trying as a middle blocker?

„Several times it happened that I have played as middle blocker in my club. So far I have not tried playing the libero position but if I did it would be a full set.“

However, which position do you consider the best for you and why?

“I think the receiver and the setter. I get on very well with Dragan Travica. Old tricks from the time when I was playing reception helped me a lot. There is a saying that volleyball players are universal? I could say it applies on me .“ 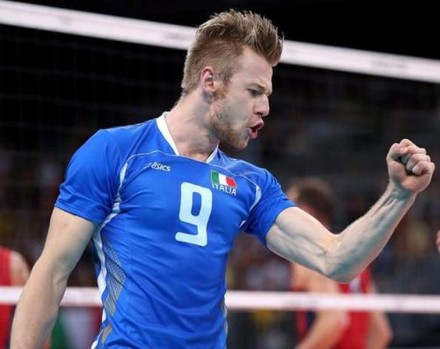 Italy’s national team is going through a generational change. However, the matches in Surgut showed that you do not have many adequate substitutes who could play.

“No, but generational change is really a difficult process. Firstly, it is important to create a compact group of players, where they will feel like at home. This feeling of brotherhood comes with age. Young players who have joined the team have the potential. The coach invited the middle blocker from the Serie A2 (Tomas Beretta), who is just getting used to play such an important matches and knows that it is a good chance for him. Our team is built in order to reach the top form at the Olympics in Rio, so we have time to get together.“

What is your opinion about the current state of the Italian volleyball?

“To be honest it is not very good. There are only four teams that have a normal budgets and pay regularly – Macerata, Trento, Piacenza and Cuneo. The other clubs in order to get new players offer some amount of money but eventually pay three times less. So, to me the Italian league can not be determined as a fully professional, at least in the sense that I understand, and as I know that prevails in Russia.“

What are the latest trends in today’s volleyball? At a time when your father played volleyball and was the captain of the Russian national team, Russians dominated, then at the top were the Americans, then we had a decade of the reign of the Italians, and in the twenty-first century Brazilians. Who is now dominating?

“It is difficult now to select one team that would be better than other. I could mention the Russians, but much depends on the mood of how they wake up in the morning. If all their players would play at its highest level, nobody could be equal to them. Cubans could be a power in years to come, but again, they always start from the bottom. If you gather the best volleyball players you will have the dominance of the Cuban team. Brazilians play technical and tactical volleyball but they need to rejuvenate the team, while Europeans turn game into a brutal force. Today, I would bet on us, Russians, Polish and Brazilians, but not on Americans, because this team can either win or lose to anyone.“

What do you think about the changed rules of the game, which will be introduced in the near future? For example, playing sets to 21 points, instead of 25?

“I have also heard about the reduced pitch size to 8 by 8 meters. In my opinion I would leave the rules as they are.“

It’s probably too early to ask, but do you think about your future in the volleyball?

“I’m far from thinking about it. I have just got married and become a family man. And if health, shoulder, knee, ankle permitt, I want to play to the age of 41, like my father.“

In which language do you communicate with your parents, wife and sister?

“Since my wife is half-Irish, half-Italian, I am talking to her in Italian. With her mother I speak English, and Russian with my parents. With my sister Anya I speak Russian and Italian.“

WCHY M: Brazilians closed first round with a perfect record

Podraščanin exclusively for WoV – “Another year...