The former Manchester United star, David Beckham, announced his retirement from football back in May and now will move into the world of television with a new kids TV show. 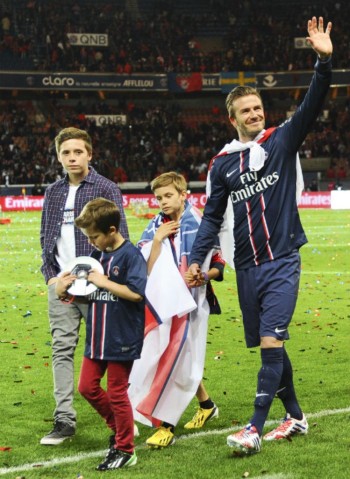 David Beckham with his children

After an emotional goodbye to the pitch in May, Beckham gave up a successful 22-year career in football and was looking forward to spending time with his family.

“After 22 years of playing football I’m going to take a few months to enjoy time with my family”.

But his career has moved from the pitch to the small screen as he takes on a role in a new kids TV show.

The father of four, will appear on the new Sky show, which will be used to promote sport to children, as he hosts ‘master classes’ to sporting hopefuls.

Airing on a Saturday morning at 9am, Game Changers, will be hosted by the athlete Darren Campbell and presenter Di Dougherty, as well as gold medallist Jessica Ennis–Hill making regular appearances.

Legends of the sporting world will be interviewed on set in front of a live audience and leaders in their field will tutor kids on how to play the games.

The Sun reported that David said about the show:

“It’s an ambition of mine to inspire more young people to take part in sport. I’m excited to be one of a great group of athletes contributing to Game Changers and working with Sky, who have the passion to make it happen”.

The programme will launch on August 17 on Sky Sports and Sky 2.

Check out our Did you know? section, every Thursday a new story.

Dennis Rodman – Bad as he wants...