The setter of BR Volleys Sebastian Kühner claimed that he had very good year. In an interview for WoV, he speaks about experience in German national team, journey with his team trough the season in Bundesliga, wishes for 2015 etc... 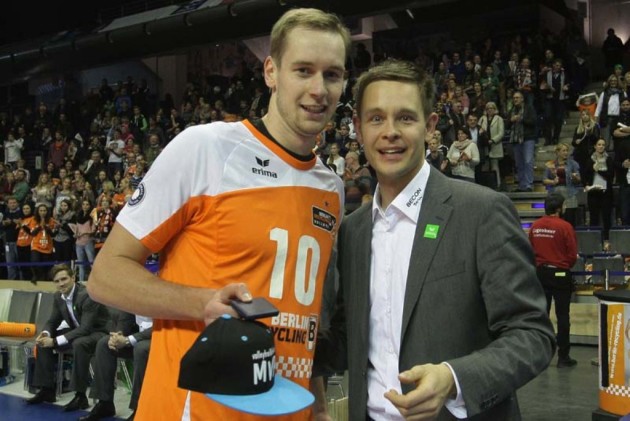 “For me 2014 was the best year in my career. We defended the German championship and I joined the national team and we took the bronze medal in Poland. Even if I had not played so much during the tournament, I’ve learned so much from the team and the coaches, plus playing in front of that crowd was simply amazing.”

Can you compare BR Volleys squad in season 2013/2014 with this season?

“Over the summer we added four very experienced guys – Eric Shoji, Rob Bontje, Francesco de Marchi and Christian Dünnes and that brought the level of the team to another level. We now have on every position equally good players. That also has effect on our practice level and creates competition every day.“

What is the biggest criticism you received from your boss?

“Our boss loves good volleyball, so he is enjoying our games most of the times. He keeps himself in the back most of the time during the season, so there was no real criticism so far. He only was upset after we lost the cup final last year but there was no yelling or something like that, we were just looking for a way to get back on track together.”

How would you describe yourself in five words?

Where did you spend New Year’s eve?

“I have a great honor to live in my hometown which is also one of the greatest cities in the world, so I stayed in Berlin where my girlfriend and we had a nice dinner with a couple of friends and afterwards we joined Berlin nightlife”

“At first, my family and me to stay healthy. On a sport perspective my biggest goal is to defend the championship another time but also to reach the final four of Champions league which, in a perfect world, will be in Berlin so we can prove to everybody that it is the best place to play volleyball. I also hope that I can fight my way into the national team-squad for the European championship and get another great result there.”

INTERVIEW: Byron Keturakis for WoV – “I...