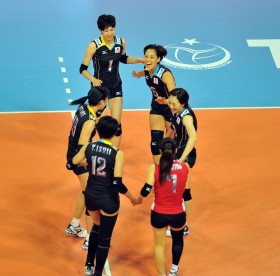 Japan jumped out to a strong start, with Algeria having to take a timeout at 0-4. They still hadn’t scored at 0-9 as Japan surged ahead.  Japan were 12 points ahead at the second TTO and eventually took the set by a 15-point margin.

Japan opened the second set by taking seven points in a row. Algeria made an effort to narrow the margin and took the next four points. Nagaoka came up with a couple of aces to make the score 12-5  and the Japanese players continued producing good serves and defence as they took the set 25-8.

Japan carried their momentum into the third set and again had a good early run, taking the first five points. Japan were 10 points ahead at the second TTO and again took the set 25-8, ending the match after just 56 minutes.