Remember that anything can be drilled. The best way to prepare for pressure is to practice pressure. Here are three drills that can help you out to do great serve . 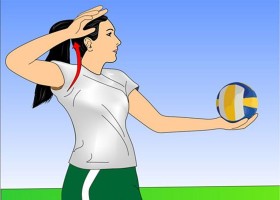 Practice good serve with your team.  For each drill:

The team is told that they will earn one point for each ball that lands in the court. However, there is a 10-point deduction for each served missed. The team begins serving. Coach says the score loudly each time a ball is served in or out.

Variations: a)change the points given/lost, depending upon the age/strength of your team; (b) give your players x minutes to complete the drill; (c) give your players x misses, where -10 is the only consequence. All misses after that will earn them a conditioning penalty; (d) the first miss is worth -10, but each additional miss is worth more; (e) the drill stops if the team ever reaches a negative “goal”; for example, if the team reaches -50, the drill ends.

The team is told that our goal is to serve 50 balls and we want 47 of them to land in the court. In addition, players are told that there will be consequences for not reaching the goal. The team begins serving. Coach says the score loudly each time a ball is served in or out.

Variations: (a) change the goal, depending upon the age/strength of your team; (b) Sometimes a team doesn’t reach their goal and I say, “Want another shot at it? If you make it, there are no consequences. If you don’t, the consequences double!!?”

The team is told that they will be asked to serve to location. The head coach designates a person to sit in a chair or stand in a designated spot on the court. That is our serving target. Players are told that a serve on target is worth one point. A serve in the court was worth 0. A missed serve was -4. Coach says the score loudly each time a point is scored, or points are lost. The drill is done when we got to 10 or to -10.

Variations: (a) change the penalty for a missed serve, in the court and/or on-target, depending on your team’s age/strength; (b) after -10 or 10 is reached, a new target location is designated, and the drill is restarted.

How to jump higher for volleyball –...