Cairo, Egypt, February 17, 2012- The African Volleyball Confederation “CAVB” Board held its first meeting since the elections in December 2011 and they approved the proposal of CAVB Commissions’ structure that will conduct the African volleyball work in this mandate. 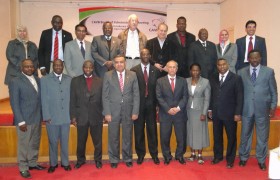 The board distributed the responsibilities of the CAVB Executive members where the CAVB first vice President Mory Keita (Guinea Conakry) will be responsible for the Development Centers and the technical Programs, the vice president and treasurer Habu Gumel will take care of the financeand Munir Ben Slimane (TUN) for the legal matters.

The board also approved the proposal for the CAVB zonal allowance which showed a considerable increase to help more development at that level specially after the decision organizing zonal qualifications for all the African competitions. The board also approved the proposed budget for the 2012 activity and the financial report of 2011 presented by the CAVB Treasurer Habu Gumel.

Packed competition schedule for Asia in 2012

Valenitina Arrighetti for WoV: “It’s not over...