Starovic: I have everything I need in Macerata

Yesterday was exactly two months since the injury in the first round match at the Italian league. In the meantime, Serbian player started with the rehabilitation and so far things are going well.

– I am already running in the pool, now I have a full knee movement, and I should soon start to run slowly outside the pool. After that I will work on the schedule that are prescribed by a doctors. 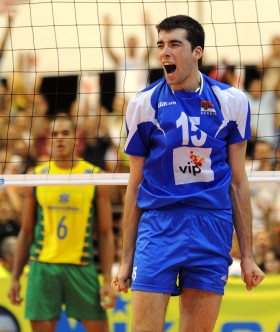 Concerning such an injuries, players need to be patient because of the risks as Starović is, but for now he goes a little “outside” the plan.

– They say that is not good, because the risks. I read a lot about this type of injury and the optimal time to recover is five to six months.

Meanwhile, Sasa and San Giustino  terminated contract by mutual agreement. Now the rehabilitation is beeing carried out in Macerata, the club whose memeber was officially Sasa for several years.

–I have everything I need to recover. As for San Giustino, what can we do, it happened and I fully understand them. They brought in some new players, and for the rest of the season I will be a member of Lube Banca Macerata.

Sasa was always patience. And now he is “armed” with time, but as he says, he is training more than when he was healthy.

–It is really like that, in the morning, doing exercises, going to the gym and the swimming pool and all it takes three hours. In the afternoon, something similar, but slightly shorter, “only” two hours. – said Sasa Starović.

Italy: Andrea Sala: We want to become strong as Cuneo

ECH M: Japan is with Serbia