Olympic Countdown 1980: Soviets reign supreme back in the USSR

Prior to 1980 the USSR had only once failed to reach the final of either the women’s or the men’s Olympic volleyball competitions. Indeed between them their teams had lost only five matches in the nascent history of Olympic volleyball. Now, with home advantage and some of their most serious rivals absent because of the political boycott, the stage was set for more Soviet success and the Moscow public was not to be disappointed. 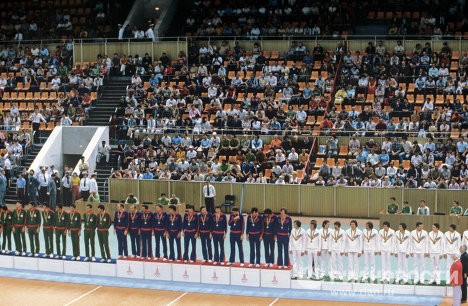 Ten men’s and eight women’s teams involving 216 players took part in the 1980 Olympic volleyball competitions, while the 49 matches were watched by just over 100,000 spectators in two different halls at the Central Lenin Stadium (now the Luzhniki Stadium). Despite the boycott the men’s tournament featured six of the top eight from the 1978 World Championship in Rome, including of course the hosts themselves who were the reigning world champions.

The USSR duly won their pool at a canter, with defending Olympic champions Poland taking the other. But in the semifinals, while USSR beat Romania in straight sets, Poland surprisingly lost to Bulgaria.

Besides Bulgaria and Romania, who took the bronze medal, other nations to make significant progress in men’s volleyball in Moscow included Yugoslavia, who came sixth on their Olympic debut, and fifth-placed Brazil who achieved their best finish yet.

Unfortunately the women’s competition was more affected by the boycott with the likes of China, Japan, Korea and USA, four of the top six teams from the 1978 World Championship, all missing out. However with legendary coach Nikolai “Howling Wolf” Karpol at the helm who is to say the gold medal would not have gone to the Soviet Union?

With the experience of Lyudmila Chernyshova and Olga Solovova allied to the power and youth of Yelena Akhaminova the host nation proved too strong for all of their opponents, including world champions Cuba who failed to live up to their billing.