CEV: Another convincing win for the home team as Turkey shuts out Croatia

Ankara, Turkey, May 2, 2012. Turkey is now a small step away from the semifinals of the 2012 Olympic Games - European Qualification for women in Ankara. The home team managed a second straight-set victory, this time over Croatia (25-19, 25-20, 25-14) and only a real miracle can leave Marco Aurelio Motta’s team out of the Final Four of this tournament. 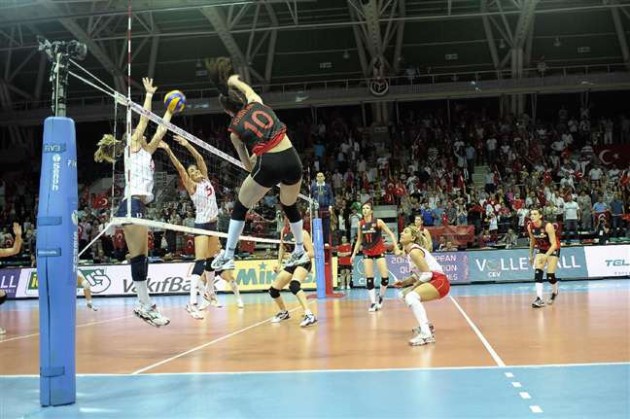 Once again supported by their enthusiastic and very noisy fans on the stands of Baskent volleyball hall, the girls mentored by Marco Aurelio Motta were able to outplay the tough Croatian team.

Although the ambitious squad from the Adriatic proved to be quite a challenge for the home team, the Turkish players took control of the first set and were able to close it at 25-19 with captain Esra Gümüs putting the ball down for the last point of the set.

Turkey kept the pressure and continued to dominate on court during the second set. It was time for Neslihan Darnel to shine.  She was hitting point after point and, although the ambitious Croatian team was able to erase a 5-point lag to equalize at 15-15, Turkey broke through again immediately after that to set Darnel for that beautiful back-row attack that finished the set off at 25-20.

In set 3 Croatia already seemed to be losing resistance power and Turkey made the best of it. It stepped up its blocking efforts and this paid-off.  The home team piled up a huge lead and a kill block by Büsra Cansu who came off as a substitute player ended it all at a convincing 25-14.

With 13 points each, Turkish players Neslihan Darnel and Gözde Sonsirma Kirdar shared the honor of becoming the game’s top scorers.

Jelena Alajbeg was once again with the most points for Croatia as she recorded 11 on her tally.

”The Turkish team played well and won the match. I hope they qualify for the Olympic Games,” Croatian captain Biljana Gligorovic said after the match.

“We did our best.  We played better than yesterday, but Turkey is too strong” her head coach Damir Jurko added.

“We knew today’s match against Croatia would be more challenging as we lost to them in the last European Championship,” captain Esra Gümüs stated. “They are a good team when they serve well.  We played well, won the game and we are happy.”

Coach Motta is convinced that Turkey is already in the semifinals: “Our players fought for each ball with team spirit, which is satisfactory and very important for any coach. We will play more relaxed in the third match tomorrow. We want to win, but it is not very important. I am very happy with my team”.