"I would like to congratulate you on the victory at the World Cup. You performed brilliantly in Japan," wrote Dmitriy Medvedev to the team of Vladimir Alekno 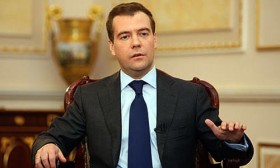 Following Russia’s victory in the FIVB Men’s World Cup in Japan at the beginning of December, the President of Russia, Mr Dmitry Medvedev, sent a telegram to the Volleyball Federation of Russia congratulating them on their success.

D. Medvedev continues: “You got to the top of the winner’s podium at such a prestigious tournament. Having gained an advantage over strong contestants, you qualified for the Olympic Games 2012. Proficiency, high team spirit and guidance of experienced coaches became the keystone of your success. I wish you good luck at the Olympic Games in London.“