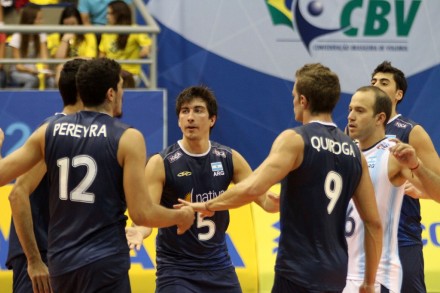 “I’m happy because we played well and we won our main goal, qualifying for the World Championships,” Argentina coach Javier Weber said. “We kept a good pace in the game with strength and determination. I want to see this same performance against Brazil (in the final), the best team in the world in the last decade. It is always very special to face them and I would like my team to show the same determination.”

The top scorer for Argentina was Federico Pereyra who made 14, while for Colombia Alexander Moreno collected seven. “We entered the court with extra motivation, the vacancy for the World Championship,” Pereyra said. “To have any chance with Brazil, we have to respect them, but we need to play as well as we did today.”

All confederations are completing their qualification process ahead of the FIVB’s premier volleyball tournament, which takes place every four years.

To read more articles from this competition click on South American Championship 2013 M.

GP: Parisi – We need one good match to boost our team’s confidence

ARG: Rolando Cholakian, one of the Argentine...