The parity of the second friendly match between the Argentine and Italian Youth's Boys team took place in the city of Tapalque, that changed completely its path when the Italian team got revenge from the first match winning over the light blue - white team 1-3 (22-25, 23-25, 25-21, 22-25. 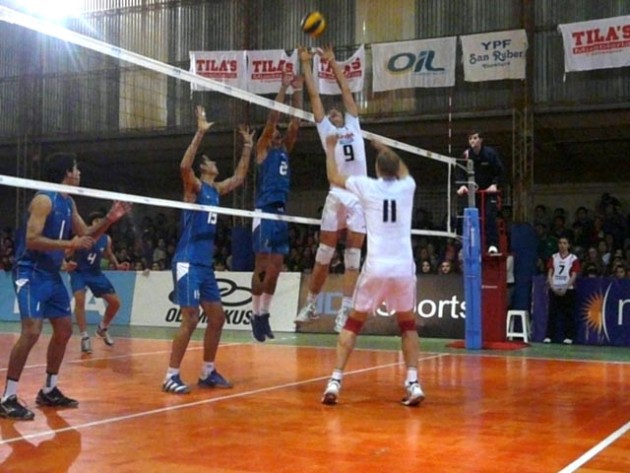 Italy got its revenge

Now, both teams move to Azul, just 50 km away where they will play the third and fourth matches on Thursday and Friday, of a total of six (the last two will take place in Bolivar).

The framework for this match was amazing with the whole city of Tapalque enjoying the match between Argentina and Italy. The City Hall Mayor, Gustavo Cocconi expressed in his welcome, not only the satisfaction for hosting such important match but his will and engagement of the whole city and its authorities to keep related to organizing international level volleyball events.

In the match itsel, the host team started working good at the net, with Bruno Lima – the top scorer with 20 points and Nicolas Lazo getting the lead on the first TTO by four points. Italy made stronger its blocking and the set got tied up to the end points when the European captain closed the set.

Lazo serving hurt at the beginning of the second set but the visiting team found its momentum to close the series 2-0 even though Argentina had the lead up to 19-19. Milan once more closed the set, this time with a spike.

Italy lead on the third until Lima got an important point to equal 9-9. The parity went on up to 19-19 when the local team with Lima spike closed the set.

Barreda and Matías Sánchez stayed as starting line-up players on the fourth and the parity kept the excitement of this set with the locals trying to force a tie-break definition but Italy got stronger at the end and scored his last point to close the set and the match.

Until now, the series stands 1-1 as Argentina won the first match at Cenard facilities in the city of Buenos Aires.