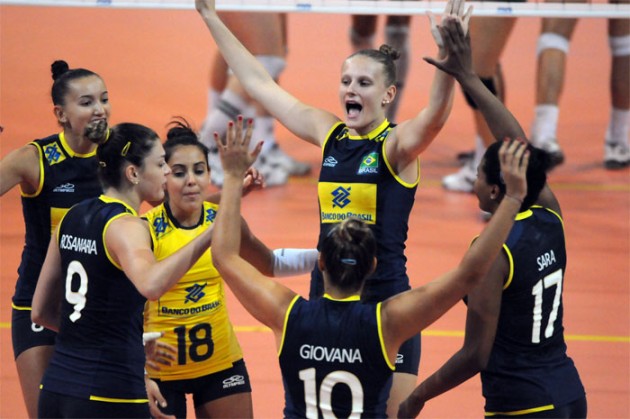 Brazil’s Silvia Sara Aparecida finished with 20 points for the winners followed by Gabriela Guimaraes with 14. Rosamaria Montibeller and Saraelen Lima contributed 12 and 9 points for the win. For Mexico, Samantha Bricio finished with 32 points, including 7 aces while Alejandra Isiordia tallied 11 (3 aces) Libzbeth Sainz added 9.

“We knew it would not be easy. They played with a very strong service. On the second set we stabilized our game and played with a lot of calm,” said Montibeller, the Brazilian captain.

“I knew we could win, some nerves and lack of concentration had some influence in the loss,” Mexican captain Alejandra Isiordia said.

“We were too confident after winning the first set and it affected us. I am not glad, I feel angry because we could not make it as we planned.”

Brazilian coach Luizomar de Moura remarked: “It was an important victory. Both our teams are junior teams and we share the same goals at this Pan Am Cup. We improved our game after struggling on the first set because of Mexico’s service strategy, but we recovered.”

“Brazil is a superpower in terms of Volleyball, everybody knows it,” said Estanislao Vachino, coach of Mexico. “This was a good match for us because it was necessary to know where we are and at what level. There are a lot of things to do before the World Championship. It is a pleasure to play them and to win a set.”

ARG M: Javier Filardi – I will fight for UPCN