Sada Cruzeiro finished a series of friendlies against the national team of Australia. The team won two consecutive victories in matches held at the Training Center of Barro Preto on Friday and Saturday. Now the team is preparing for the showdown in Superliga next Tuesday. 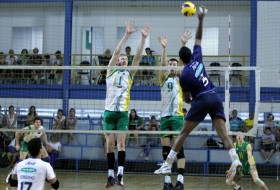 With a different team from the one that finished last season, Sada Cruzeiro got the best in the first clash, beating the Australians by 3 sets to 0, with partial 25-23, 25-22 and 25-23. The highest scorer was the “celeste” opposite Paulo Victor, who scored 21 points.

In both games, the team that went into court was: Vinhedo, Douglas Cordeiro, Pedro, Paulo Victor, Leal, Luis Diaz and libero Serginho. The spiker Philip, who felt pain in the shoulder, was spared and the four players invited to the Brazilian national team: William, Wallace and Isac, also did not play.

See the profile of Sada Cruzeiro and Australia.