GP F6: Ze Roberto – “We are not a level above other teams” 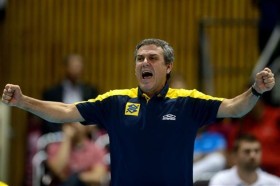 “I’m very happy with today’s victory and winning the World Grand Prix for the ninth time. This tournament is a very valuable tournament for Brazil because we can play against several strong teams with different playing styles. Also, we have to be away from home for about a month, but what we gain from this is bigger. My team’s attitude was good for the whole tournament. I don’t think we are a level above other teams. There were several teams that couldn’t make it to the finals, such as Russia, Turkey and Bulgaria, so on that basis I can’t make a comparison. Leading up to the Rio Olympics, all the other teams will improve so we don’t want to be left behind. In terms of speed and defence, we want to catch up with other teams”, said Ze Roberto, head coach of Brazil.

Chinese coach Lang Ping: “Today, we tried our best. Last night, we finished very late and some players have injuries so we preferred to rest them. Also some of our players haven’t had so many opportunities to play. We did what we could. I think our team did a good job. We learned so much and also could see the talent of our young players. We know in the future who we want to work on. There are lots of areas we should improve. I want to thank Japan for organizing this beautiful tournament. The people who wored with our team were very professional and the fans have been nice”.