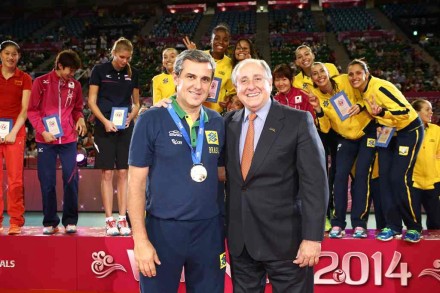 The 2014 World Grand Prix title stands out as another glorious milestone in the Brazilian coach’s career. Ze Roberto also led his country to victory in the 2013 World Grand Prix, adding to a long list of his achievements in the sport. He is the only Brazil coach to win three Olympic gold medals, steering the men’s team to victory at Barcelona 1992 and the women’s at Beijing 2008 and London 2012.

Since his appointment as the women’s coach in 2003, Ze Roberto has also mentored the side to six successive South American Championship triumphs and gold at the 2011 Pan American Games. Other highlights of an outstanding coaching career include triumphs with Turkish women’s team Fenerbahce at the 2010 FIVB Volleyball Women’s World Club Championship and in the 2012 European Champions League.

The Brazilian coach’s next major challenge will be to lead his team to success at the FIVB Women’s World Championship Italy 2014, which will take place from September 23 to October 10. The South Americans will hope to improve on the silver medals they won at the World Championships in 2010 and 2006.

I don`t know if you guys know, but Ary Graca stole lots of money from Brazilian Confederation of Volleyball while he was the president.

I don`t know if that is still under investigation, but seams like there`s nothing anybody can do, can not even be considered for criminal charges.

He was not only stealing for himself, but other member such as former players were doing the same.

This past season a few Brazilian teams closed their doors. And lot of players like Sheilla Castro, Fabiola, Vissoto, Bruninho and others are no longer playing in Brazil for the next season.