Bernardo Rezende will be the Brazilian head coach until 2016. 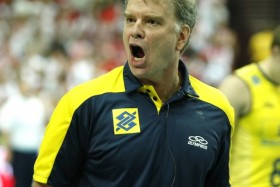 “There are several teams on the same level as Brazil and the same aspirations. We will give our best, accept defeat with dignity, but we won’t give up” Rezende said after the World League.

He kept his word, and despite the fact that he didn’t bring the golden medal from London, he decided to stay and build a new squad for the next Olympics, in their homeland. “I have many rideas, I will sit down to prepare the ground for new staff” charismatic coach said before the Olympic Games in London.

He works with the Brazilian team for eleven years. He led his team to the gold in Athens Olympics, in Beijing and London they won the silver. He won the World Cup twice, World Championship three times, World League eight times.

BUL M: Naydenov and Placi in the Bulgarian staff until 2016