Despite losing their home game a week ago in straight sets Generali UNTERHACHING are still setting their sights on the semifinals of the 2013 CEV Volleyball Cup. This and other volleyball news read on Worldofvolley.com. 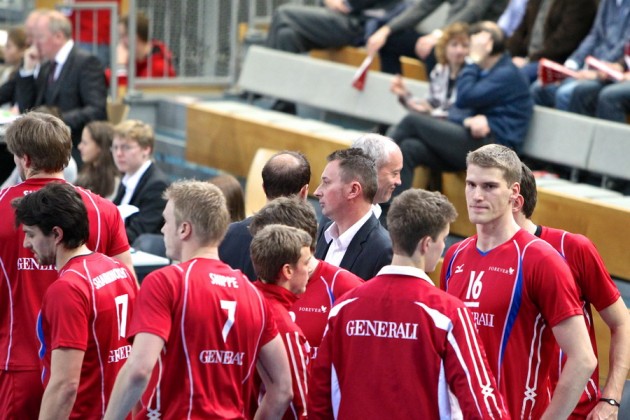 Playing Andreoli LATINA in their home court on Thursday the Germans know they have a steep mountain to climb, but they will nevertheless take on the task with optimism.

UNTERHACHING know they have to win no matter how to get to the golden set first. Indeed, despite losing 0:3 last Wednesday and being a little bit stunned after that the team from the outskirts of Munich boarded the plane to Rome with quite some confidence on Tuesday. Jan-Willem Snippe has a simple plan for the match against his former club. “We simply must not make so many stupid mistakes as we did in the first match. If we do that we stand a chance”.

That kind of optimism is echoed by head coach Mihai Paduretu. “We have nothing to lose” he said, “and we can cause a surprise if we go into the game very focused and determined”. First of all, Paduretu will be able to send out some players whom he missed as of lately:  Matias Raymaekers, Robert Hupka as well as Alex Shafranovich are back in action.

What could irritate UNTERHACHING is their record with tie-breaking sets, though. Four times already Generali has been eliminated from European competitions by losing the golden set, the last time on the hands of Lokomotiv NOVOSIBIRSK in the 2012 CEV Volleyball Champions League. Only once they won a tie-breaking set, dating back to the 2008 Challenge Cup against Ribnica KRALJEVO from Serbia.

But even LATINA doesn’t take anything for granted after convincingly winning in Germany. “They can play better than they did in the first match”, Andreoli’s head coach Silvano Prandi says, “I’m convinced they’ll commit fewer mistakes and that this will be a very tough match”.