Opposite Ventzislav Simeonov and attacker/receiver Valentin Bratoev will stay for another season in the VfB FRIEDRICHSHAFEN. Both players decided to extend the contract with the club. "I've never been treated better than in FRIEDRICHSHAFEN," said Bratoev. "Here I can play like a professional." This and other volleyball news read on Worldofvolley.com. 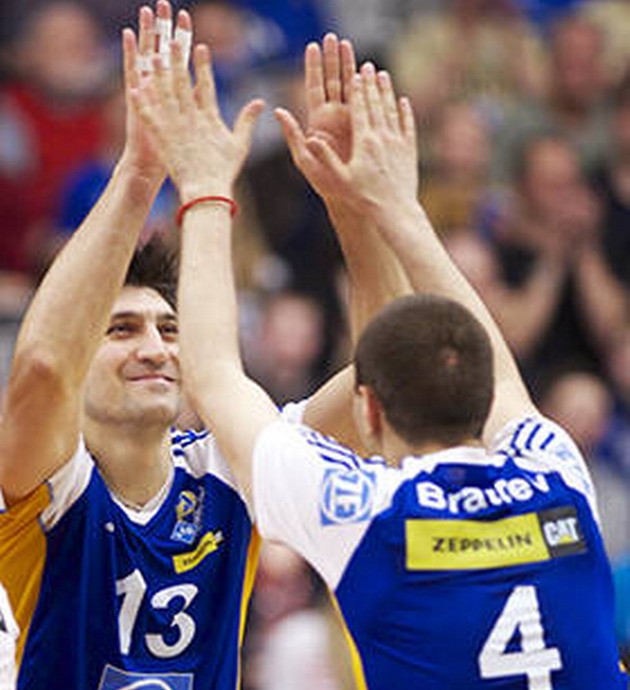 Ventzislav Simeonov extended his contract with the VfB FRIEDRICHSHAFEN for one season. The opposite, with Italian and Bulgarian citizenship, wish to win the championship in his first year in Germany but he was stopped this year. He will try to do in the next season with VfB FRIEDRICHSHAFEN.

“At my age, you want to win title,” says the 36-year-old opposite player. Simeonov in FRIEDRICHSHAFEN enjoys family life with his wife Gergana and daughter Kayla. “It was the best decision for me to go to FRIEDRICHSHAFEN,” he explains. “And that’s why I stay for another year.”

Not only during the first round, but especially in the championship finals Simeonov showed an excellent performance. He advanced with a total of 178 points for direct best scorer of the playoffs and came in second place as the Most Valuable Player of the championship. “Ventzislav done his duty completely,” VfB FRIEDRICHSHAFEN coach Stelian Moculescu said about his opposite.

Valentin Bratoev was promoted in the play-off stage, where he has 20 direct points and become favorite of the fans. During his career the 25-year-old was behind great volleyball players at his previous clubs and now the place in the starting six of VfB FRIEDRICHSHAFEN is guaranteed for him.

“I feel well treated here and I can concentrate on my work,” says Bratoev who has also signed for another year with VfB. “Valentine has many qualities,” Moculescu is satisfied with his protégé. “These qualities we want to develop.”

“This two players complement each other very well. This is an investment that pays off for sure” said Stelian Moculescu.

#IAMINBERLIN: Holmes for WoV – “Advancing into...