CL M: Knack ROESELARE to extend rivalry with VfB FRIEDRICHSHAFEN in opening round 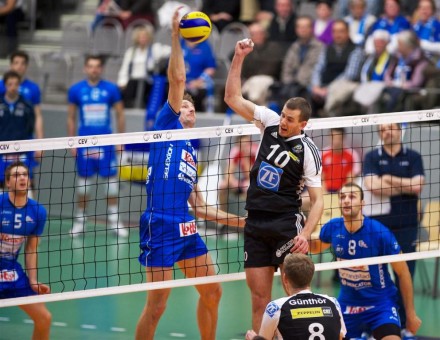 This will be a remake of the matches played last season where Knack and VfB were assigned to the same prelim pool; ROESELARE won their home game 3:1 before FRIEDRICHSHAFEN responded by seizing the night at the tie-break on the shores of the Lake of Constance.

“They signed seven new players: Bulgaria’s Viktor Yosifov and Svetoslav Gotsev, French libero Jenia Grebennikov and his teammate Baptiste Geiler, two excellent German players, Christian Dünnes and Jan Zimmermann, as well as Roland Gergye from Hungary. Almost all these players stand above 200 cm tall and have much experience in their native countries as well as with their national teams” said Knack ROESELARE head coach Emile Rousseaux.

“So you can’t compare the team that we will be playing on Tuesday with the side that was standing on the other side of the net last year as we won 3:1 here at the Schiervelde sports hall. Teams like VfB always bounce back after a disappointing season like the one they had last year and so I expect a very tough game. We have scored three consecutive victories in the national league and cup without conceding a set to our opponents but with all my respect teams such as Waremme, Zoersel, and Guibertin aren’t a real benchmark” Rousseaux continues.

The head coach of VfB FRIEDRICHSHAFEN, Stelian Moculescu, said: “Last year’s defeat to Knack ROESELARE was one of the worst moments in our season and this shall not happen again”.

VfB is the only club who hasn’t missed a single season in the CEV Volleyball Champions League since the competition was introduced back 13 years ago, winning the title in 2007.

POL W: “It was not easy against Gornicza” – Glinka