GER M: Germans must believe in themselves

No sooner had Germany qualified emphatically for the FIVB Volleyball Men's World Championship Poland 2014 than preparations began for the big event in Poland from September 3 to 21. 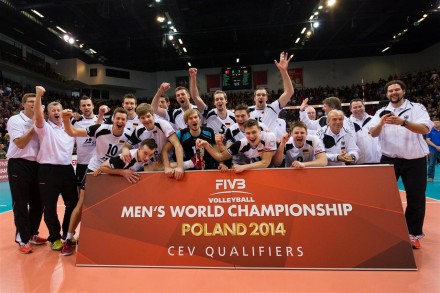 Germany have qualified for WCH

Rather than celebrating in style in the Ludwigsburg changing rooms after watching his team on Sunday secure a ticket to the World Championship, coach Vital Heynen was already hard at work arranging individual training programs for his players, with the highlight of the season in mind.

“Anyone wishing to be crowned World Champions must first win 15 matches. We have three behind us with 12 still to come,” said Heynen. And to back up this ambitious statement, he revealed the goal for this year: “The Germans still don’t really believe in themselves. I want to change that. Our goal for 2013 was to integrate young players in our team and to see them develop further. In 2014 we want to win something.” That goes for the FIVB Volleyball World League, in which Germany is drawn against Japan, Argentina and France in the opening round, but primarily for the FIVB Volleyball Men’s World Championship Poland 2014.

To underline the lofty goals, Heynen had motivated his players ahead of the all-important match against Turkey with a story about his nine-year-old daughter Bente. She had asked mummy Heynen whether the FIVB Volleyball Men’s World Championship Poland 2014 was during the school holidays. When mummy answered ‘no’, and informed her little darling that she would be at school as usual, Heynen junior answered with just one word: “YOLO”. The in word stands for “you only live once”. For Bente Heynen, this means: World Championship instead of school. For the German volleyball stars: take your chances. Heynen: “The World Championship only comes around every four years, and a player may only experience the event once.”

Hence the goal of winning medals – even if it might sound a little utopian at first. Only once in the history of the World Championship has a German team come out on top, when the squad from the former GDR won 44 years ago. Since then, no German men’s team has finished in the medals at the World Championship. However, 2010 did produce the best result since 1974, with the Germans coming eighth in Italy. And the young team has improved significantly since then. Proof of this came in the form of a competent World Championship qualifying campaign in front of almost 10,000 delighted fans in Ludwigsburg. The Germans came out with the best record of all 20 teams involved in last weekend’s five tournaments: three wins with nine sets won and zero conceded.

The team has continued to develop since its successful 2013, in which it only just missed out on the FIVB Volleyball World League Finals. High-flying outside hitter Denis Kaliberda, who was the best German with 16 points in the 3-0 victory of Turkey, has been particularly impressive with a series of world-class performances. As such, the German team is no longer so dependent on the form of main attacker Georg Grozer (15 points). “We will know how good we really are after the World Championship. However, we cannot afford a repeat of last year’s European Championship, at which we started very well and then crashed out,” Kaliberda said.

Among the German team’s successes in the Preliminary Round of the European Championship was an impressive 3-0 win against probably the best team in the world at the time, Russia. However, they then lost to Bulgaria – a team they had defeated in the Preliminary Round – in the quarterfinals.  Kaliberda: “Back then, we were still afraid of the big success.”