On their way to the FIVB Volleyball Men’s World Championship Poland 2014, Germany’s national team will be first participating in this year’s World League. Their debut is set for May 23-24 with two home matches due to take place at the brose ARENA in Bamberg where the players mentored by Belgian-born coach Vital Heynen will be taking on Japan. 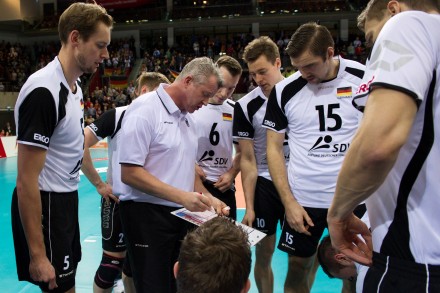 “We want to win a medal at the World Championship in Poland and the World League will be helping us get ready for the Worlds and get used to win matches while being under pressure,” said Heynen while attending a press conference in Bamberg.

“Japan plays in a totally different way than we are used to in Europe,” stressed Heynen. “The last time I played with a Japanese team was back in 1989 and since then their way of playing volleyball hasn’t changed much. I know that they have appointed a new coach and they are striving to come back to the top, but right now I can’t really single out any players that they will nominate for our matches here in Bamberg. I also do not know which players will join our training camp which is due to start on May 5. There are still many question marks and everything depends on the obligations they have towards their clubs and how they will perform in the Playoffs of their respective leagues.”

RUS W: Gamova – “Fener called but I wanted only Dinamo”

TUR M: Marshall – “We are hungry for success”