A red couch is usually one of the first things a player sees when he comes to Haching. The red couch is neither a hot seat nor part of a psychologist’s practice; it is simply – and since a long time – a fixture in the office of the German Cup winner that is representing Germany in the CEV Volleyball Champions League for the second straight year. 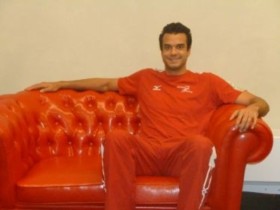 “Servus”, “Guten Morgen”, “Danke”. Fredy Cedeno speaks but a few German words. He is ready to admit that he is not good at learning languages. However, the language of Volleyball is of course universal, and besides from that the outgoing 30-year old middle blocker from Venezuela by now has found enough ways to communicate.

With most of his teammates from Generali UNTERHACHING Cedeno speaks English, with colleague Thiago Oliveira and assistant coach Camilo Glober he can opt for his native Spanish or Portuguese.

His German might never be good, but one thing is for sure: Cedeno has arrived in the outskirts of Munich and is making people talk about him. “Unterhaching is only a small place, but I’m here to work”, he says of his stint with the three-time German Cup winner which just qualified for its fourth cup final in a row coming up in March.

“Fredy has used the national team break to settle down here”, assistant coach Glober explains Cedeno’s explosion in the past month. The 30-year old self admits that during his somewhat bumpy start into the season his handicaps were both on the cultural side and related to Volleyball. “It is my first year here, I had to adapt to life in Germany”, Cedeno says. In addition, he explains, “the middle blocker is very dependent from the setter but at the beginning of the season our main setter Brano Skladany was missing in practice being busy with the European Championship”.

#IAMINBERLIN: Zenit will fight for the trophy!