Bitter trip back from Siberia for the Macerata team, which was defeated 3-1 and has to make do with the second place of the group. The Russians inflicted to Macerata its second European loss of the season and clinched first place. The draw for the playoffs 12 will take place in Luxemburg tomorrow at 2.30pm. 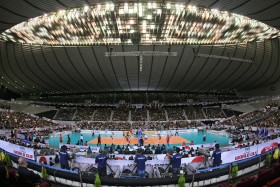 Alberto Giuliani (coach Lube Banca Marche Macerata): People can say whatever they want about today’s game but the only thing I really want to underline is the fact that the boys never gave up. At the end of the game, I went to talk to them in the lockers and I told them I would never mention again the words character and aggressiveness because everyone of them proved tonight they had lots of it. From now on well focus on other things in order to do as well as possible in the competitions in which well take part.

between January 31 and February 2.

Italy: Lorenzo Bernardi: competition for the Cup of Poland is additional mobilization