After seizing the night last week edging Germany’s champions BERLIN Recycling Volleys, the bronze medallists from the 2013 FIVB Club World Championship, Diatec TRENTINO, will go on Wednesday for their second home game in the prelims of the 2014 CEV DenizBank Volleyball Champions League. This time they are set to host Switzerland’s rookie Energy Investments LUGANO that last Wednesday caused a real sensation by slipping past Arkas IZMIR of Turkey at the tie-break. 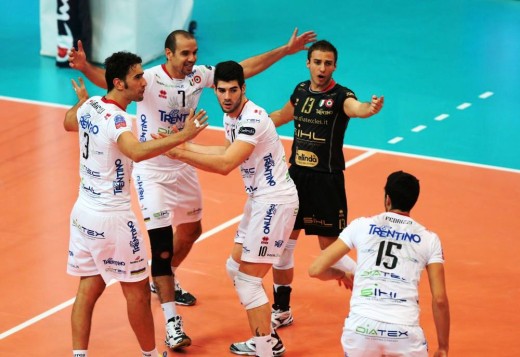 The leadership in Pool D will be at stake at PalaTrento and TRENTINO will try to claim a second victory so as to re-assert their intention to make the Playoffs 12.

Though the team has undergone major changes last summer and its core is represented by young and rather inexperienced players, TRENTINO want to show what they are capable of and delight once more their always passionate fans. Since the start of a still young season, TRENTINO has claimed six out of their eight matches, a win/loss record that sounds very encouraging for a group that has been together for a relatively short period of time.

All players are fit and also US American setter Donald Suxho will be back in action after nursing a knee injury.

“We have a very tight schedule and have practically no breaks if you combine the European Cups and the national league” head coach Roberto Serniotti says. “The game with LUGANO will be extremely important because they are hugely motivated after their home victory with IZMIR. We shall find the right attitude and energy needed to take home another three points so that we can travel a little more relaxed to Izmir next week. It is not going to be easy but we have what it takes to make this happen” he concluded.