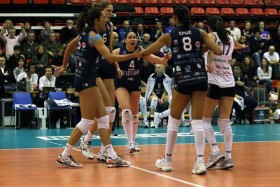 Pesaro started well, but Wilson turned the result in favor of Villa Cortese.

Many errors especially in the service (4 for Villa and 7 for Pesaro), characterized the middle phase of the set.

In 2. set the block of Wilson was very valuable for the feedback of MC-Carnaghi.

Pesaro relied on Ortolani trying to lower the difference from 13:8 to 13:11, but Villa Cortese was better, thanks to Guiggi and Lucia Bosetti. It secured a big difference in score and Wilson closed the third set with 25:17.

In 3. set Villa Cortese took the leadership at the beginning with two consecutive points of Guiggi.

In the fourth set, MC-Carnaghi took the lead from the start (8:6) and Scavolini relied on Brinker and Klineman getting to 14 points.

The ace of Bosetti and the block of Wilson were decesive for Villa Cortese (17:14). Pesaro got to one point difference (17:16), but the break of the duo Pavan and Cruz led the hosts to the semifinals (24:18).

As in the previous sets, Pesaro did not reduce the advantage of its rival. Thanks to Pavan Villa scored the final 25:22, taking the victory.

In the semifinals, Villa Cortese will face Bergamo.