“Massimo, Massimo, Massimo…” Pomi Caslamaggiore fans were chanting the name of their hero long after the end of the 2016 Women’s CEV Champions League Finals. 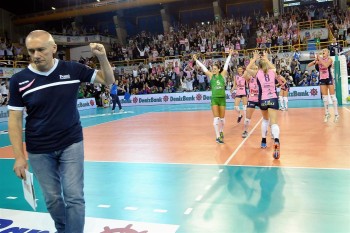 His name will stay written in the history book of Pomi Calamaggiore. Coach Massimo Barbolini arrived in the pink world last summer and he made an unbelievable success already in his first season.

He won the CEV Champions League! First ever for this club!

“Now, we can celebrate,” started Barbolini. “This was spectacular and unbelievable. We played the best match of our season. We played three close sets against a great team such as VakifBank. I think that at the end that we deserved this win. The girls made an unbelievable job and I am really happy.”

Experienced head coach stated that his team did not feel any pressure, despite being the host of the final tournament.

“Playing at home was not a pressure for us. I think it was a more difficult circumstance the fact that we did not play the Playoffs stage, because we missed some high level games and immediately came to the semifinals. If I am not mistaken, in the last 20 years only a couple of times happened that the hosts of the F4 have won the trophy. One of them was Tenerife and they won the finals against me (smile), when I was in Perugia. I remember that very well (smile).”

There is a one interesting thing about Barbolini. He won his first CEV Champions League trophy back in 1996 with Parmalat Matera. Then 10 years later he won his second European crown with Perugia in 2006. Finally, after 10 more years, he is again holding the precious trophy in his hands today in 2016!

LIVE from F4 W: Milena Rašić – “To be the 2nd best team in Europe is not that bad”

LIVE from F4 W: Gilyazutdinov – “Gamova and Startseva were healthy, and suddenly…”