Knack ROESELARE could not celebrate a happy end in what was their 175th game in the European Cups as the group mentored by head coach Emile Rousseaux lost also the return match scheduled for the Challenge Round of the 2013 CEV Volleyball Cup – Men to Turkey’s Halkbank ANKARA 0:3. Read latest volleyball news on Worldofvolley.com. 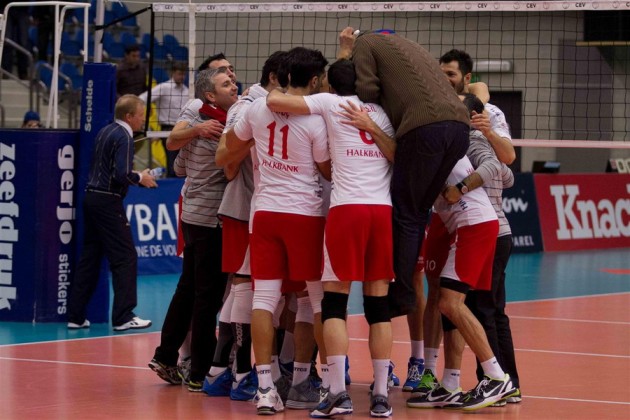 In the semis Halkbank will be playing Ukraine‘s Lokomotiv KHARKIV.

The guests from Turkey started out strong and claimed the lead right in the early phases of the first set (7:4) by exploiting some good serving by their Egyptian star Ahmed Abdelhay. After a timid reaction by Knack, Halkbank once more stood out from the serving line, this time with Venezuelan Luis Augusto Diaz who – together with Reid Priddy and Husayin Koc – paved the way for the final 25-18 and provisional 1:0.

Resul Tekeli contributed a personal show in every single fundamental in the opening of the second set (7:2) but Knack stormed back with a series of blocks killed by Joppe Paulides and Ruben Van Hirtum (7:6). Abdelhay got Halkbank back on track but the Egyptian spiker received a yellow card, something that eventually could help Knack move to the front (14:13). A very dramatic final rush followed with Priddy finishing it off with a couple of pipes and another attack from the wing (25-23).

Knack caught a good start in the third set going up 8:5 by the first technical time-out as setter Eemi Tervaportti marshaled his spikers with evident confidence. The longest rally of the game was finished by Knack with a block on Abdelhay (13:12) but Priddy then flipped the charts around already by the second technical time-out (16:14). Knack did not surrender and fought back anchored by their most prolific scorer, Hendrik Tuerlinckx (who registered 11 points in the end), but some mistakes decided the final outcome of the game which turned into a 3:0 win for Halkbank (25-20).