Outdone in a thrilling tie-breaker by Zenit KAZAN in the second round of the Playoffs 12 in the 2013 CEV Volleyball Champions League, BERLIN Recycling Volleys finished off their international campaign as the team returned to Berlin today. This and other volleyball news read on Worldofvolley.com. 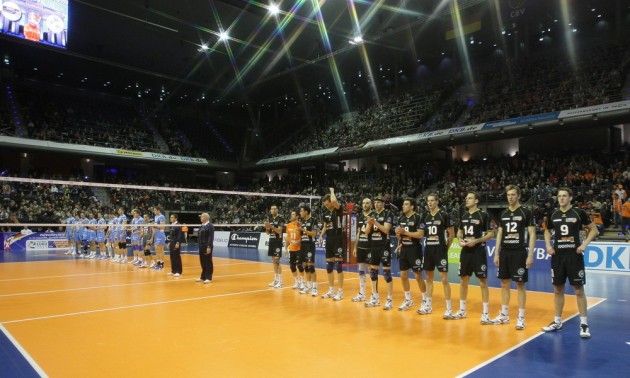 After two unpredictably close matches against the 2012 defending champions, the team of head coach Mark Lebedew can look back on a successful comeback in Europe’s most elitist competition.

Yet again, it was a tie-break to end an exhilarating clash between the Russian standout and the champions league returnee BERLIN, yet again the side of Zenit could eventually claim the match. “It is an intense mix of pride and disappointment”, the Australian head coach Mark Lebedew said after the game adding: “We proved our qualities against one of the best teams of the world for two matches, played at eye level and lost both narrowly”.

Celebrating a successful comeback after an absence of eight years, for BERLIN Recycling Volleys pride however outweighs the disappointment of missing out on a rare opportunity to edge one of the top favorites of this year’s CL campaign. Being the only representative of its domestic league in the Playoffs 12 the 2012 German national champion accomplished the goal set for its international campaign as the team managed to advance to the round of the last twelve clubs. Edging Lokomotiv NOVOSIBIRSK 3:1 in the prelim home clash and stretching Zenit KAZAN to the limit in front of almost 7’000 spectators at home, the side of BERLIN could celebrate memorable Champions League nights at Max-Schmeling-Halle.

“To play in Europe’s most elitist club competition after eight years has been a great experience for us”, club president Kaweh Niroomand summarized this international appearance. “Competing on international top level is extremely important for the development of our team. We want to come back in the 2014 CEV Volleyball Champions League, possibly by claiming the German championship.”

Topping the standings in German Bundesliga, BERLIN still has five matches to play before the start of national Playoffs in March.

CEV CL F: Azerrail routs Lokomotiv once more to make it to Playoffs 6