The home heroes of Belgium got off to a flying start in the first-round qualifier for the 2014 FIVB Volleyball World Championship running this week in Kortrijk as they edged Austria 3:1 (25-13, 19-25, 25-14, and 25-19) in their opening game. This and other volleyball news read on Worldofvolley.com. 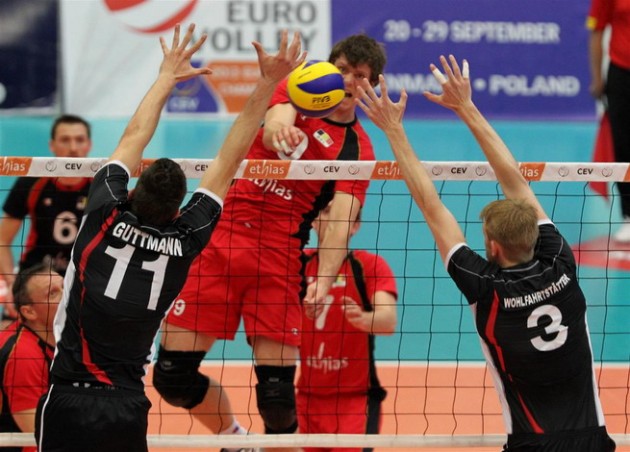 Belgium was well marshaled by their setter Frank Depestele while Hendrik Tuerlinckx – the “player of the year” in the Belgian national league – finished the game with 25 points.

Belgium caught an excellent start and set the tempo of the game in the first set (25-13) with Sam Deroo and Pieter Verhees showing to the local audience the benefits resulting from the season they have spent in Italy playing there for the likes of Casa MODENA and Andreoli LATINA. They were well served by Depestele while Simon Van de Voorde did an excellent job in blocking. However, after showing a drop in their focus in the early phases of the second set, the Belgians did help Austria find their rhythm with Thomas Zass scoring with good consistency. Belgium could find back their level from the first set only after the score was leveled at 1:1 in sets.

“Frank Depestele is a world-class setter and he was the key to Belgium’s success tonight” Austria’s head coach Michael Warm said. “He scored some aces and he was the absolute leader of his team especially in all crucial moments. However, I am still pleased with the performance of my team. We have confirmed that Austria as a Volleyball country is getting better and better. Still our opponents from Belgium are some years ahead of us in terms of their development”.

Tuerlinckx was on a class of his own in the fourth set paving the way for the final 3:1 win of the home side. “After the end of the national league I could rest for a few weeks and this was good to recover both mentally and physically. Now I am playing with the same quality I did show this past season while representing Knack ROESELARE” the Belgian opposite commented.

In the other match of the day Romania did easily – as expected – best Northern Ireland in three straight sets (25-12, 25-15, and 25-12). The guys from Northern Ireland could briefly move to the front in the second set helped by Patrick Crooks but after that short break Romania got back full control of the game.

BRA W: OSASCO relies on Jaqueline but has Plan B