The Czech Republic established its position of dominance in pool B of 2013 CEV Volleyball European League, after achieving a convincing victory over Montenegro by 3:1 in the second day of competition of the tournament held this weekend in Barcelona. Stewart Bernard and Nikola Matijasevic commented the game. 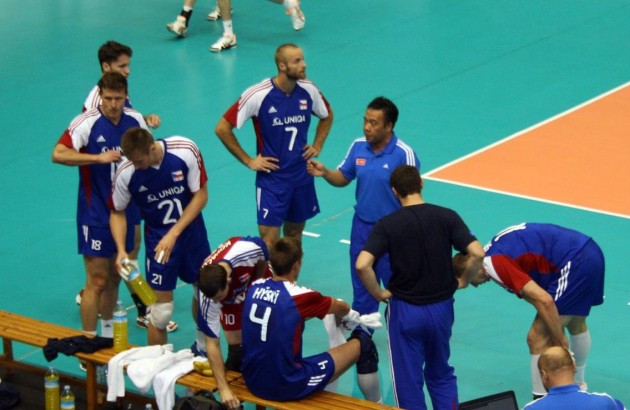 The race for a spot in the final four lived a relevant episode this Saturday in Barcelona. The victory of pool-leader Czech Republic over the main contender for the top position of the group, Montenegro, confirmed the authority of the Czech squad. The Czech Republic won 3:1 (16-21, 21-14, 21-14 and 21-17) in a match marked by the spectacular comeback of the team trained by Stewart Bernard. Montenegro starred in an effective first set, but the Czech Republic used its efficient blocking and serving system to subdue its opponents in the three following periods, in a convincing demonstration of power.

“You have to fight very hard to win every match in this pool”, acknowledged Czech Republic head coach, Stewart Bernard; “Our serve was the key point for us today; our good work from the serving line, in combination with our blocks, lead us to victory.”

“The Czech Republic played a great match today”, pointed out the head coach of Montenegro, Nikola Matijasevic; “it was our worst match in this European League, we were not fresh enough and the Czech players made a big difference with their blocks. It was absolutely logical for us to lose. I just hope that we will be able to accept this defeat because tomorrow we have another important match that we cannot lose” he added.